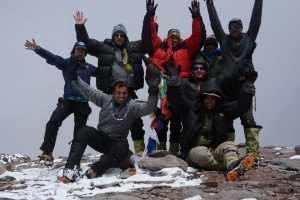 April’s Del Orme Text from the summit just minutes ago.

They have indeed made it. Awesome!

They’re at Camp 3 and chilling. All are safe and healthy. They will be there till tomorrow when they go for the summit.

Will report more when I get it.

Our first Aconcagua expedition is safely down after a 15-day expedition that saw us reach the summit on a beautiful windless day.

After flying to Mendoza, Argentina the team began the 3-day trek into Base Camp carrying light packs and being supported by mules.  The team battled through many days of strong winds and some snowy days early on in the trip but were able to keep forward progress inching closer to a high camp that put us in position for our summit bid.

Climbing Aconcagua does not require any “technical skills”.  It’s challenges lie in dealing with high altitude, changeable weather, cold temperatures, carrying heavy loads, and taking care of yourself in the mountain environment.  As the team moves higher the strategy is to keep acclimatizing and staying healthy in the increasingly rarefied air.

Strong winds high on the mountain revealed themselves day after day with big snow plumes blowing off the Polish Glacier that decorated our skyline view.  They didn’t prevent us from moving into position for a summit attempt though.  As the team’s health remained good we kept to our schedule and hoped when we were ready for a summit attempt the weather would settle down.  Our patience paid off and we found ourselves settling into Camp 3 with only a light breeze and clear skies on December 14.  The team prepped for the summit day, had an early dinner, and got into their sleeping bags before it got dark.

Waking before sunrise SMI guide April Mayhew started the stoves to make hot drinks and breakfast while Kurt checked on the group and made sure everybody was ready for the big day.  The sky displayed a vast array of stars and no clouds while the weather was crisp and calm.  As we started out at 5:30am the horizon showed the first hints of light from the sun rising casting an orange glow over the far reaching skyline.

The thin air required deep breathing in the cold air in a steady rhythm of 1-2 breaths per step.  By the time we would reach the summit it was 3-4 deep breaths per step.  The team took breaks at regular intervals where they ate, drank, and took in the spectacular views Aconcagua offers.  Eventually we found ourselves taking a break at “The Cave” at 22,000’/6700m.  Above is the Canaleta Chute making up the last 841’/250+m to the summit.  The route weaves it’s way through boulders and snowbanks culminating at the summit.

The team did a great job showing tenacity and lots of sticktoitiveness over a very respectable 7 1/2 hour climb to the summit.  Calm weather allowed the team to relax on the summit to enjoy the views, take photos, eat, and drink.  After a generous 45 minutes or so on the summit the team began packing up and then retracing their steps back to high camp.

The following day they descended to Base Camp and took advantage of the opportunity to hire a helicopter to fly directly back to their hotel in Los Penitentes where much deserved showers awaited.  On December 17 the team was back in Mendoza celebrating at 1884 Francis Mallmann, the nicest restaurant in Mendoza and the perfect way to put the icing on the cake of a great expedition.

December 2: The team at the trailhead ready to start the 3-day trek to Base Camp.

Our mules at the end of the second day’s journey en route to Base Camp.

Our arrieros (mule drivers) preparing an Argentine “asado” over a wood fire on the evening of day 2 of our approach to Base Camp.

Traditional Argentine cuts of meat over a wood barbecue make up the centerpiece of a tasty “asado”.

The team traversing an iced over glacial pond en route to Camp 1.

The team at a rest break during a failed attempt to reach Camp 1. After reaching approximately 15,500′ the decision was made to turn back to Base Camp and try another day.

Ed leading the pack on the final steep slope below Camp 1.

Afternoon downtime the team enjoying a hot drink at Camp 1.

Afternoon snacks are essential as the team rests and “fuels” up in preparation for summit day the next morning.

Brandon psyched at a rest break with the early morning sun starting to crest the horizon.

Aconcagua forming this beautiful penumbra as it casts its shadow across the Andes at sunrise.

SMI guide April Mayhew psyched in the middle of the Canaleta en route to the summit.

The team negotiating the terrain high in the Caneleta a short distance below the summit.

Nathan topping out on the highest point in the Western Hemisphere!

Natalie and Brandon with SMI guide Kurt Wedberg posing at the summit cross on Aconcagua with flags from Big City Mountaineer’s. Both Natalie and Brandon raised over $8800 to help underprivileged youth experience the outdoors and learn critical life skills. Thanks you two for raising money for such a great cause!!

SMI guide April Mayhew reaches the summit of Aconcagua for the 4th time in three years. Great job April helping guide another successful SMI expedition to the top of the Western Hemisphere!!

Long time SMI veteran Ed poses for another summit photo in front of Kurt Wedberg’s lens. After climbing all of California’s 14ers, Kilimanjaro, and peaks in Peru this was his toughest challenge yet. He accomplished it with flying colors. Another awesome job Ed!!!

Back at Base Camp the team loaded into two helicopter flights off the mountain. Base Camp to showers before we knew it!!!

December 17, 2013: Celebration dinner at 1884 Francis Mallmann. This is arguably the nicest restaurant in Mendoza and the perfect way to cap off an awesome expedition to Aconcagua!!

The TEAM is safely down and on their way back to MENDOZA as I write. They should be in direct contact with all Family and Friends some time this afternoon here in CONUS.

Again, a hearty well done & congratulations to all SMI/BCM TEAM Members on their amazing accomplishment and success of climbing Aconcagua. 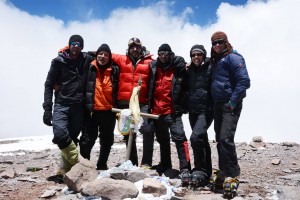 The TEAM SUMMITS on the 15th!!! 100% success on a picture perfect morning …. no wind and clear as a bell. They are all safe and sound and on their way down to Base Camp. Should all be back in Mendoza either on the eve of the 17th or morning of the 18th. Photo’s to follow!!!

And of course SMI’s Kurt Wedberg and April Mayhew!! 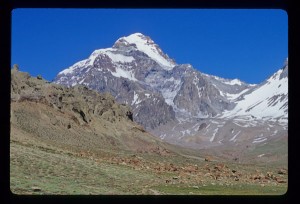 The SMI/BCM Team led by Kurt and April, has made it successfully to Base Camp and have been doing some acclimatization hikes the past two days. They are all doing well and are very excited to begin the actual climb tomorrow. They will be headed up to Camp 1 and will remain there for the day early in the morning. The weather has been stormy and windy. That has not deterred them what so ever. Onward they go. They all send their love to all the families and friends back here in CONUS.

Greetings from Bishop, CA!  We hope this finds everybody well and enjoying the fall season.  After a busy summer and fall we have been hard at work planning for 2014.  We have also launched a new web site for your viewing pleasure.  We invite you to have a look and come with us on a trip!

As of this writing SMI guides April Mayhew and Kurt Wedberg are off to Argentina for an Aconcagua expedition.  Back home in the Sierra the weather is getting cold and we’ve seen some of our first significant snowfall.  We’re gearing up for winter time activities including ice climbing, backcountry skiing, and avalanche courses.

Basin Mountain and surrounding skyline on Sunday November 24, 2013 after our recent snowstorm.

Mt. Kenya:  February 1-10, 2014.  A technical rock climb up the second highest mountain in Africa.  The climbing ranges from low 5th class up to 5.7.  It’s in a beautiful, remote, and wild setting overlooking the beautiful East Africa jungles.

Kilimanjaro and Safari:  February 11-25, 2014.  A 7-day climb of the highest mountain in Africa combined with a game viewing safari where we see some of the most spectacular wildlife on our planet!

Ice Climbing Courses:  Ice is forming now in Lee Vining Canyon and June Lake.  Come up and discover the exhilaration of climbing ice in these premier destinations.