Our first climb of the East Face of Mt. Whitney in 2009 was a one day car to car ascent.  Leaving Whitney Portal wearing headlamps we ascended the North Fork of Lone Pine Creek with the goal of reaching the base of the route at sunrise.  We would then climb efficiently up the route leaving us plenty of daylight to return to Whitney Portal in time for burgers from the Whitney Portal Store.

Taking a quick rest break at Lower Boyscout Lake in the middle of the night.

Polemonium's in full bloom. They only grow above 12,000 feet in the Sierra.

Sunrise at the start of the East Face of Mt. Whitney

The Tower Traverse, the first pitch of the East Face route on Mt. Whitney.

Finishing pitch #4 at the top of the Washboards.

Pitch #5 above the Washboards with Iceberg Lake behind.

The Fresh Air Traverse on the East Face of Mt. Whitney

As we finished off the final 5th class pitch clouds were building around Mt. Whitney

A well earned summit photo on top of Mt. Whitney!

As clouds surrounded Keeler Needle immediately south of Mt. Whitney it began to hail. The summit is no place to be in a storm so it was time to descend.

Descending the upper section of the Mountaineers Route of Mt. Whitney.

We had a great climb of Mt. Whitney via the Mountaineer’s Route.  We were treated to warm, clear, and calm weather for the entire trip.  To allow for plenty of acclimatization and some training on techniques we planned a 4-day trip.  There was plenty of snow from Iceberg Lake and higher but it is melting fast in the Sierra right now. John Rogitz, Bill Simon, Ralph Buoncristiani, and Michael Tate geared up and ready for the climb! Ralph, Bill, and John on the last pitch of the Mountaineer's Route 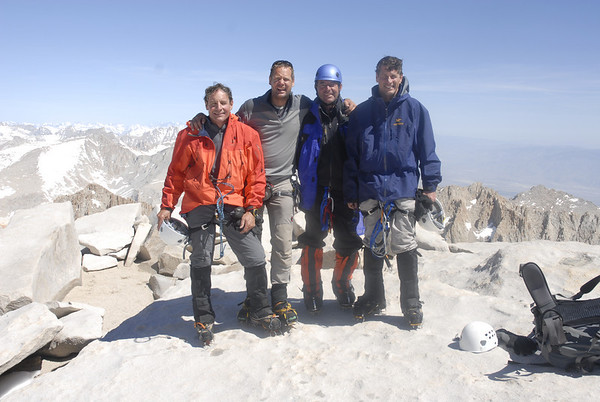 Ralph, Kurt, John, and Bill on the summit of Mt. Whitney 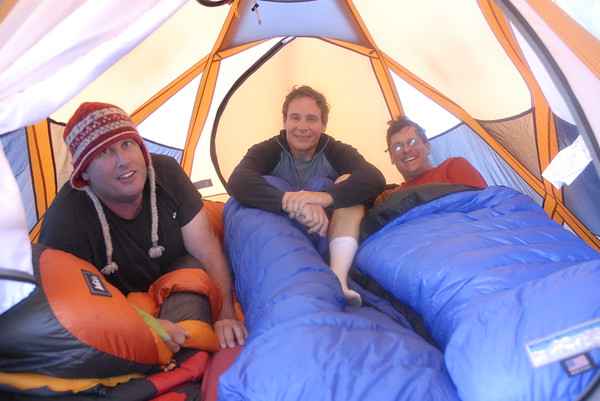 Mike, Ralph, and Bill getting settled in the tent