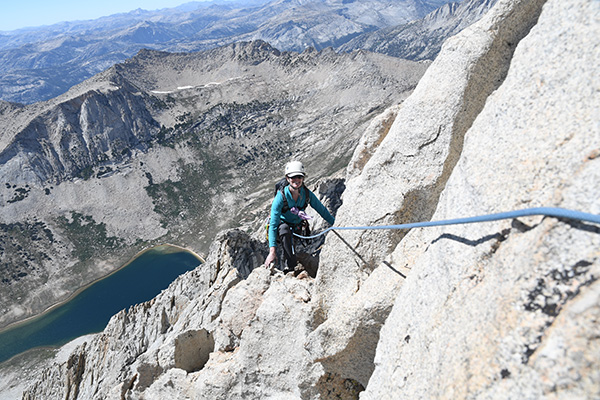 Alpine rock climbing at its finest!

The approach begins at Saddlebag Lake, which is a short distance off the Tioga Pass Road. The hike takes us past alpine lakes on a trail decorated with native wildflowers as it ascends to the base of the North Ridge.

The beginning pitches and rappel of the North Ridge of Mt. Conness

We then roped up where the terrain narrows and becomes more exposed. A few short pitches in the difficulty range of 3rd to low 5th class led us to the first tower where two rappels lead to the upper end of the route.

The top half of the North Ridge of Mt. Conness!

A complete photo gallery from this day can be viewed here. SMI arranges climbs of the North Ridge of Mt. Conness on any day between June 1 and October 15. Visit our website to learn about Mt. Conness and other classic Sierra Nevada alpine rock climbs. Reserve your spot today for a memorable adventure with our expert staff. 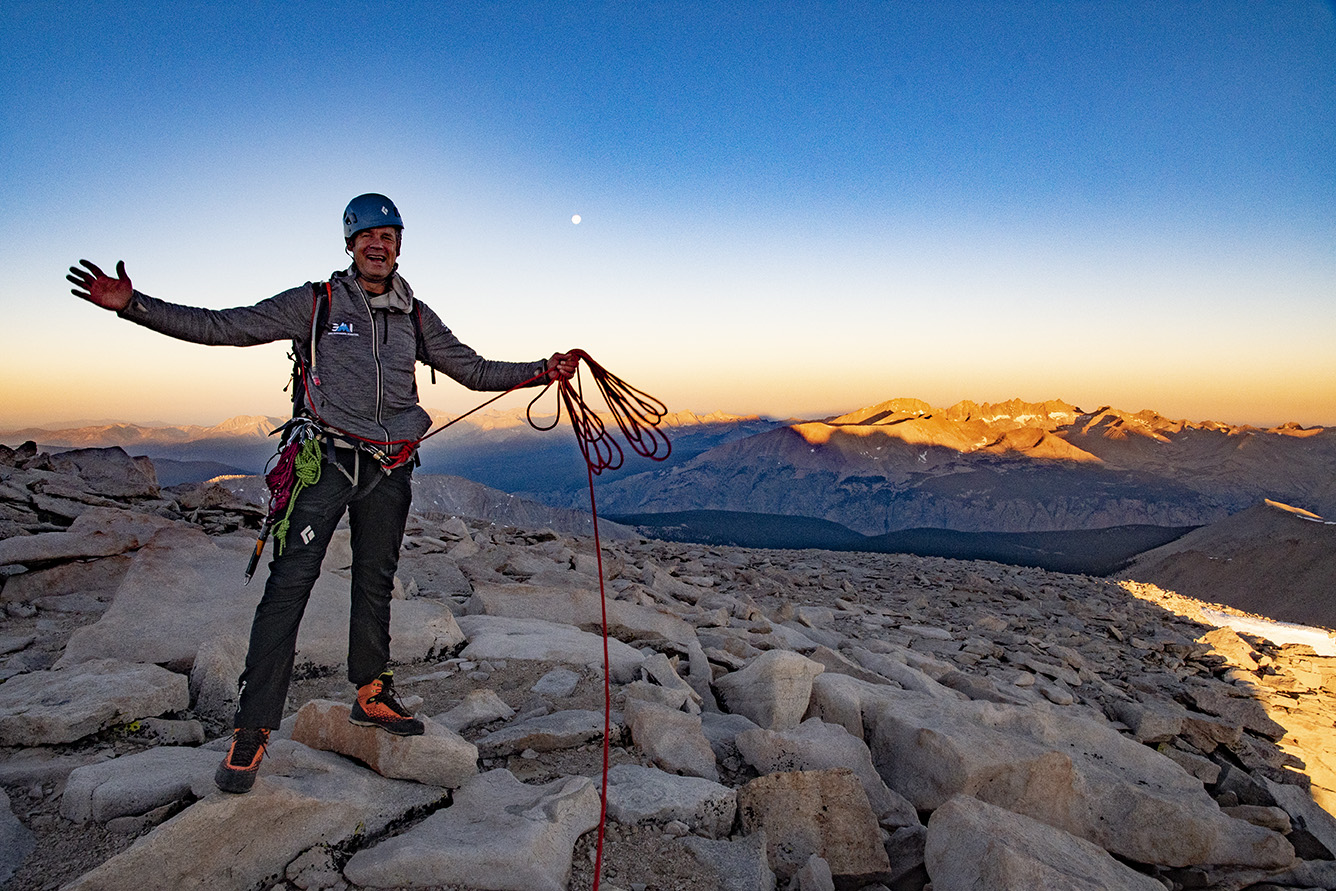 After spending two days working on alpine rock climbing skills with Erin, Christy, and Vicki it was time to put some techniques into practice on some real alpine climbs.  Our first objective was the North Ridge of Mt.  Conness.  Mt. Conness is located in Tuolumne Meadows on the edge of Yosemite National Park.  The North Ridge is an enjoyable classic Sierra alpine climb positioned high enough to offer views as far as Half Dome into Yosemite Valley and many more prominent peaks in all directions.  This climb has it all including fun climbing on high quality granite, two rappels off the 2nd Tower along the route, and exhilarating scenery throughout.

The group divided into two teams led by SMI guides April Mayhew and Kurt Wedberg.  The goal was much more than just to climb the route in good style.  It was to pass on as many climbing techniques as possible to help the team develop efficient climbing habits for use in alpine terrain where time, weather, and route finding are all critical to a safe and successful climb.

The climb went extremely well.  A few pictures are below.  The entire photo gallery can be found here: The team on the trail near Saddlebag Lake en route to the North Ridge of Mt. Conness. Taking a break on the approach with the North Ridge of Mt. Conness on the skyline.Vicki and Erin on the start of the North Ridge.Erin rappelling off the 2nd Tower.

Erin and Vicki high on the North Ridge of Mt. Conness. Erin and Vicki making some of the final moves near the top of the North Ridge. A yellow bellied marmot greeting us at the summit of Mt. Conness.

On August 5 Scott Bushman joined Kurt Wedberg for an ascent of the classic North Ridge of Mt. Conness 12,590′, 3837m.  Mt. Conness is located near the border with Yosemite National Park.  The mountain is flanked by the Conness Glacier on its north side with the North Ridge forming one side of the glacier’s border.  Rock quality of this granite peak is superb and the views are outstanding offering an excellent vantage point straight into Yosemite Valley.  Scenes of Half Dome and Mt. Lyell are two of the many well known features that stand out during this climb.

The approach is on a broad ridge that leads to an increasingly narrow path.  Eventually a tower is reached requiring a rappel before several pitches of enjoyable climbing lead to the summit.  The difficult rating is anywhere from 5.6 – 5.8 depending on the exact line taken.

Thanks Scott for a great day!

Here are a few highlights.  The entire photo gallery can be found here:  Mt. Conness August 5, 2010.

The North Ridge of Mt. Conness

The ridge and face beyond the first tower.

View of the first tower as seen after we rappelled it and began climbing higher towards the summit.

Scott approaching the top of pitch #2

Scott on the crest of the North Ridge at pitch #4