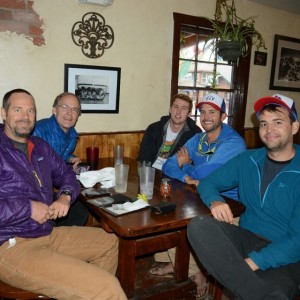 SMI’s Kurt Wedberg and his Team, Fred, Jim and Mike Simmons as well as MT guide Blaine Horner have finally gotten started on their quest to summit Mt. McKinley. After a two day weather hold in Talkeetna, they flew onto the Kahiltna glacier and began their ascent. After 4 days of hauling loads & settling into camp @11000′  they took a well deserved rest day.

Their spirits are high and are anticipating a a couple days of clear weather beginning today so they can continue up to the 16,000 foot camp and onto their advance summit camp at 18,900.

Stay tuned for more reports as we get them.

Kurt and Fred are at 17,200 waiting out a storm and hoping for a window for the summit.

Kurt and Fred hopefully shooting for the summit today.

The entire Team is down and back in Talkeetna safely. No summit due to consistent bad weather.