Home » Blog » Everest Team Ready To Move Above Base Camp! 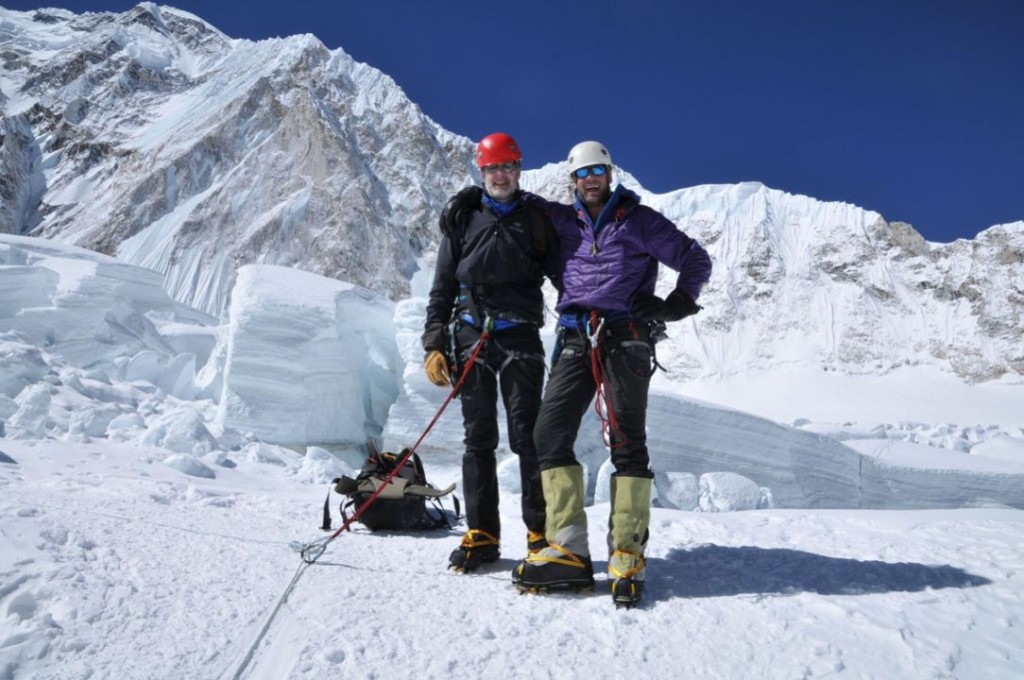 Since arriving at Base Camp (5365m/17,600′) our primary focus has been to start the acclimatization process in preparation for moving higher on the mountain.  Acclimatizing is the term used for the human body as it adjusts to higher elevation.  As one ascends the available oxygen diminishes.  By the time we hit approximately 5500m or 18,000′ we have half the available oxygen as at sea level.  The summit of Everest (8850m/29,035′) has 21% of the O2 that’s at the ocean.  The human body’s reaction to living at higher elevation is to produce more red blood cells in an effort to more efficiently transport oxygen through our systems.  Climbing higher and returning to Base Camp helps this process nicely. 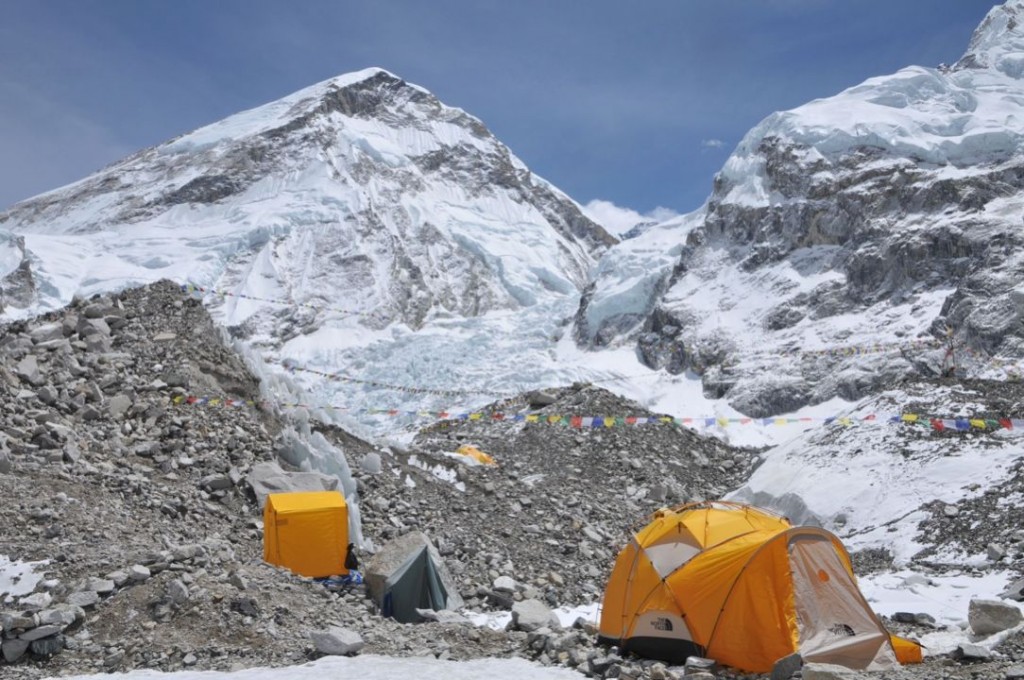 The view from our Base Camp. Mt. Everest is obscured from view by the prominent point left of center, which leads to Everest's West Ridge. The Khumbu Icefall is the broken up snow/ice directly above the dirt in the foreground.

We have now taken several acclimatizing day hikes and have had great success.  Each time we took another hike we felt stronger.  One hike we took was to Camp 1 of a nearby mountain called Pumo Ri (7165m/23,507′).  This striking peak sits on the border of Nepal and Tibet on the opposite side of the Khumbu Glacier from where Mt. Everest is located.  Hiking to C1 on Pumo Ri not only got us up to 5640m/18,503′ but we got a nice view of the route where we will soon be climbing. 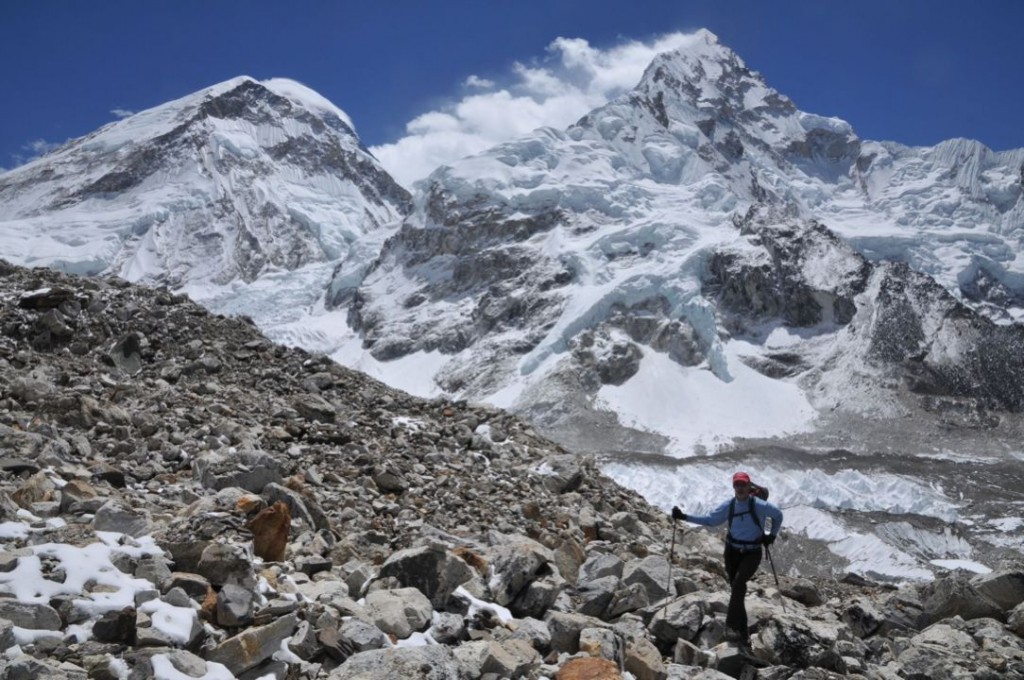 Fred enjoying an acclimatization hike on Pumo Ri above Base Camp with the dramatic backdrop of Nuptse (right) and Everest (left). 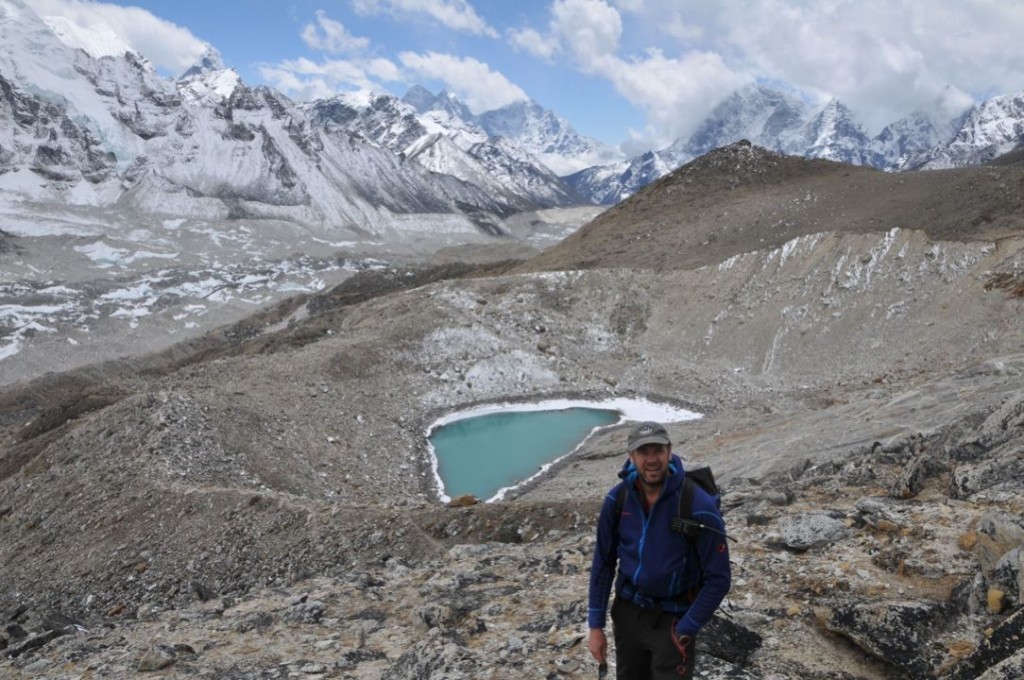 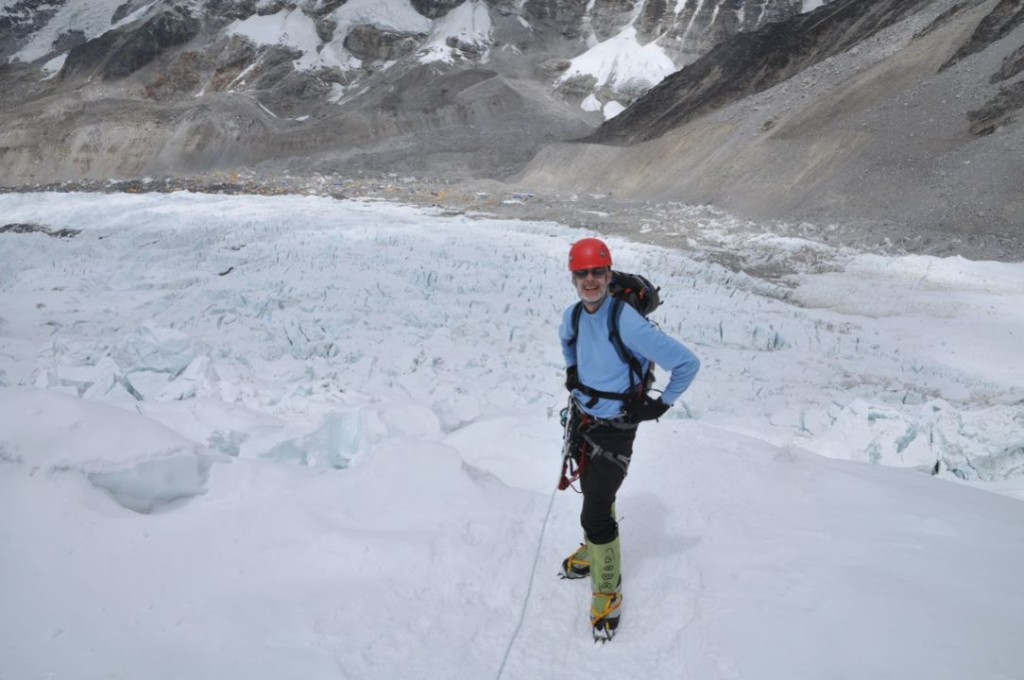 Fred at the base of the Khumbu Icefall with Everest Base Camp behind.

We also climbed into the infamous Khumbu Icefall.  The Khumbu Glacier begins at an altitude of over 6700m or 22,000′.  It flows down past our Base Camp (we’re camped on the Khumbu Glacier) to its terminus at about 4900m or 16,000′.  There’s an area above Base Camp where two ridge lines on either side of the glacier angle towards each other forcing it to flow through a more narrow corridor.  Right at this location the terrain steepens considerably.  This causes the glacier to do two things:  (1) speed up its flow to about 3′-4′ per day, and (2) break up its smooth flow into large ice blocks that weigh several tons and crevasses that can be 30m or 100’+ deep.  This feature on a glacier is called an “icefall”.
.
To navigate through the Khumbu Icefall climbers must weave their way around and over countless large ice blocks and cross ladders that are anchored in the snow/ice to span the large crevasses.  We took three trips into the Khumbu Icefall.  Each successive time we went higher in elevation offering us the chance to further acclimatize.  This also gave us the opportunity to practice and get efficient with climbing techniques that we use as we climb higher on Mt Everest.  Climbing efficiently is essential for energy conservation on big mountains, and critical for a safe and successful ascent of Mt Everest.  Each time through we analyzed how the day went and identified areas that we could work on to help make the next trip more efficient.
.
Our last climb up the Khumbu Icefall was on Aprl 16. We made it to an altitude of 6050m/19,849′.  This brought us all the way through the Icefall to within about 30 minutes from Camp 1.  After a quick break for water and food we descended back to Base Camp.  We did the round trip in a very respectable 7 hours 40 minutes.  With the success of this latest climb we are now ready to explore and sleep higher on Mt Everest!
.
Our plan for the next few days (weather permitting) is to sleep as high as Camp 2 then return to Base Camp to rest and recuperate:
.
April 17-18:  Rest/prepare food and equipment for being at Camps 1 & 2.
April 19:  Move to Camp 1 (6120m/20,078′), sleep here.
April 20:  Climb to Camp 2, sleep at Camp 1.
April 21:  Climb to Camp 2 (6495m/21,309′), sleep here.
April 22:  Climb to base of the Lhotse Face (6750m/22,145′), sleep at C2.
April 23:  Return to Base Camp.
.
We plan on spending a few days resting at Base Camp then we will climb back to C2 and try to sleep above this camp.  To put us in position for a summit attempt we will establish Camp 3 at 7406m/24,300′ and Camp 4 at 7955m/26,100′.  More on these camps later.  Stay tuned…
.
We’re feeling strong and healthy as we prepare to make our move towards Camps 1 & 2.  A special thank you to all our family and friends for your continued support.  We will plan on checking in again after April 23!
.
Below are a few pictures of our adventures climbing in the Khumbu Icefall: 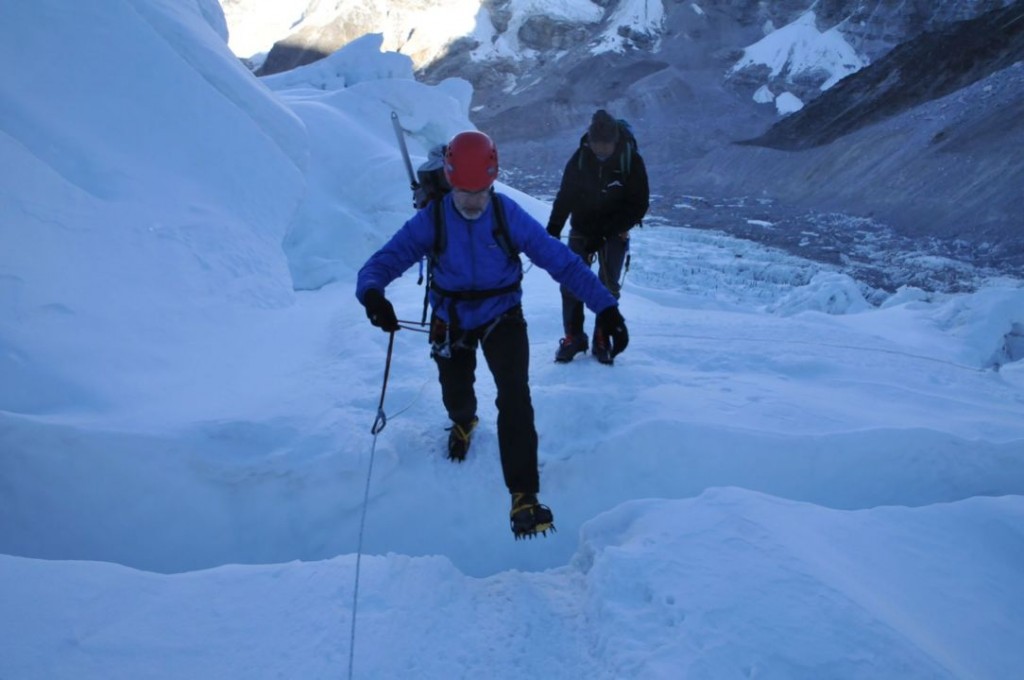 Fred crossing a crevasse on the Khumbu Glacier during an acclimatization climb on April 14, 2012. 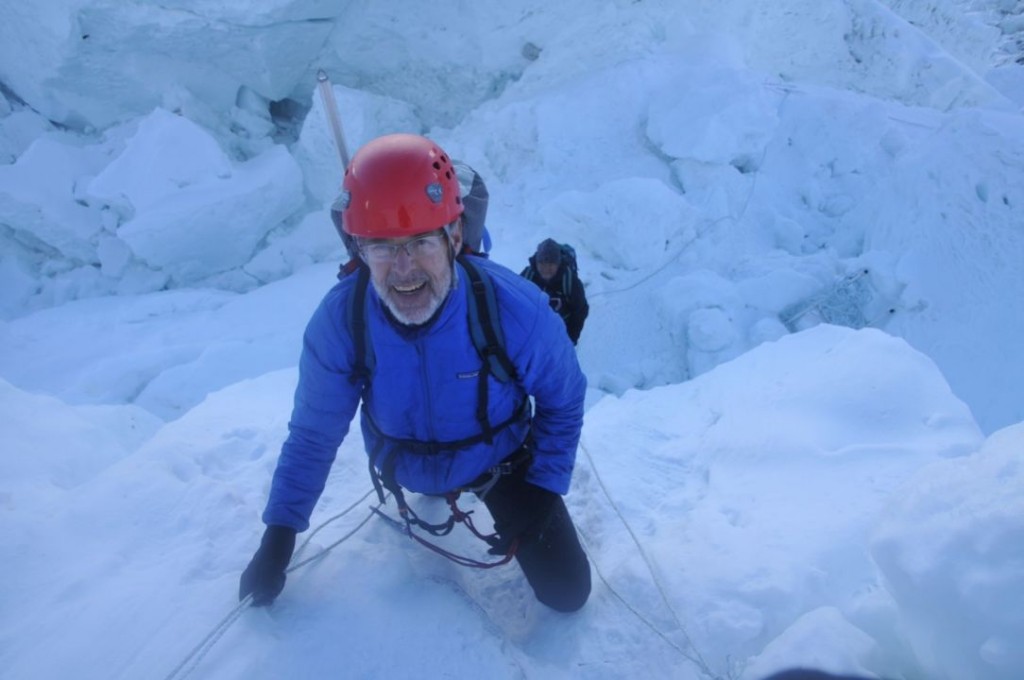 Fred topping out on a large ice block while climbing in the Khumbu Icefall. 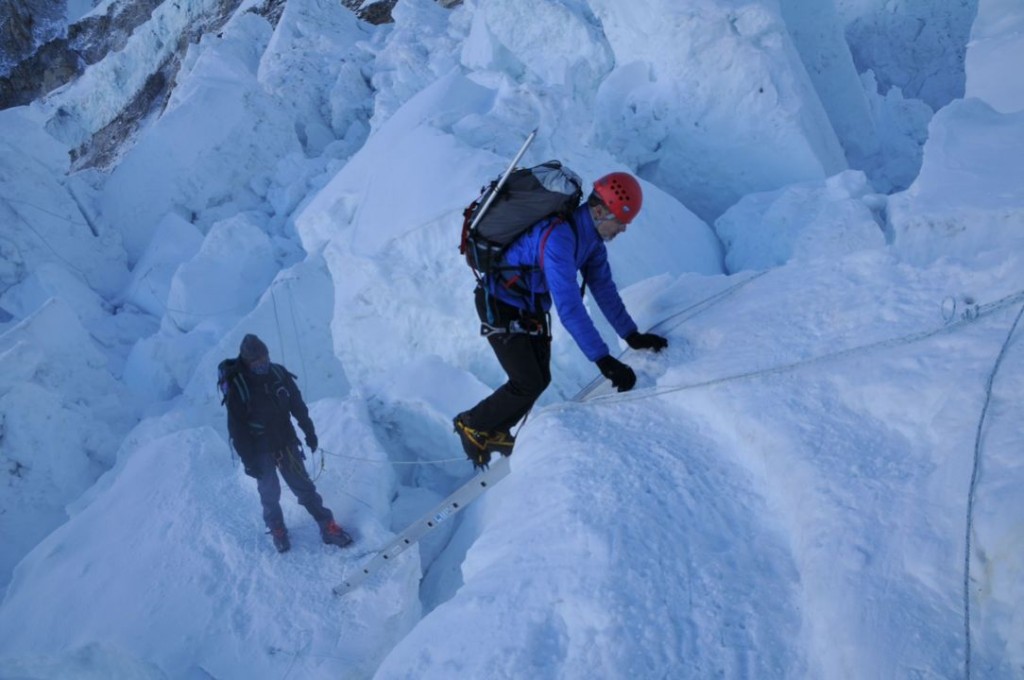 Fred climbing a ladder spanning an overhanging ice block in the Khumbu Icefall. 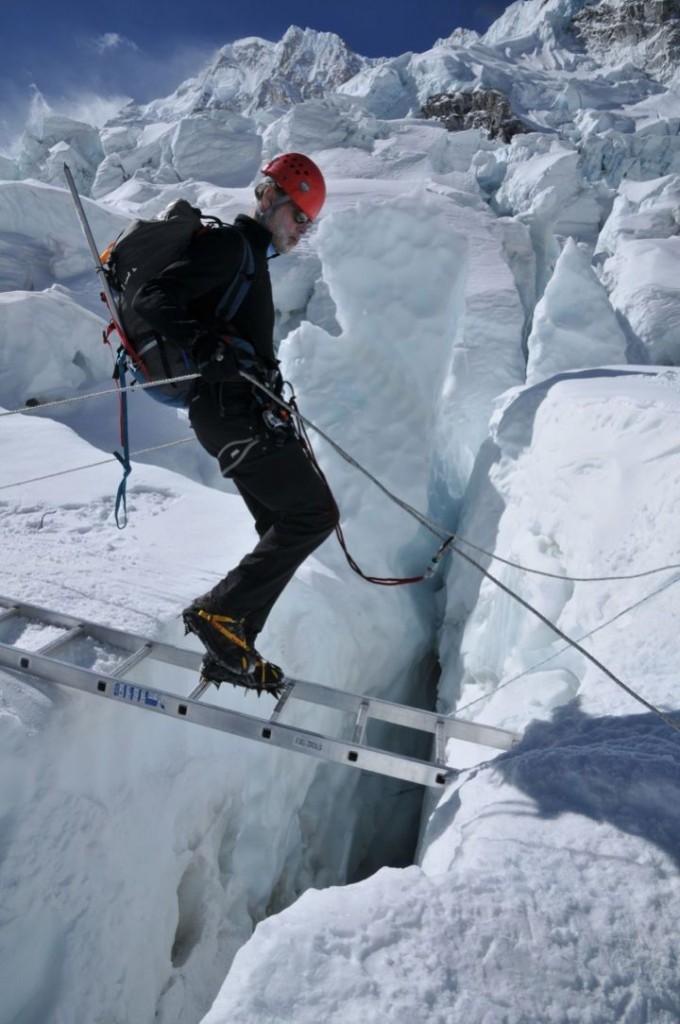 Fred crossing a ladder spanning a deep crevasse in the Khumbu Icefall on the descent of an acclimatization climb. 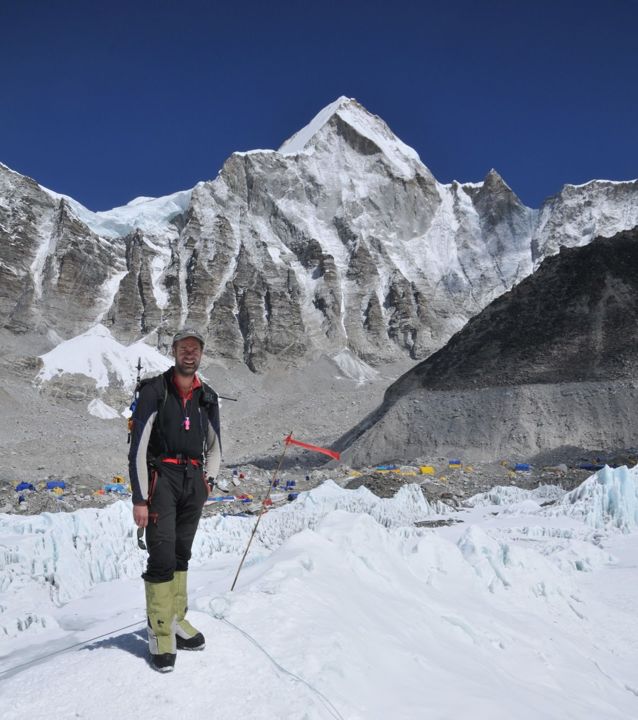 Kurt at the bottom of the Khumbu Icefall at the end of another successful acclimatization climb.

8 comments on “Everest Team Ready To Move Above Base Camp!”