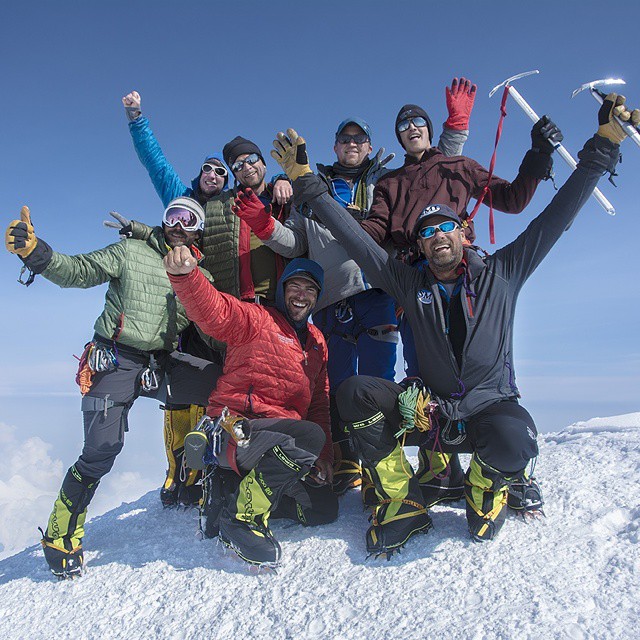 Today they are descending. Kurt said they are “packing up from high camp. We’ll descend to 11000 today then travel the lower glacier tonight.”

Expect more photos and updates, as they return to civilization! 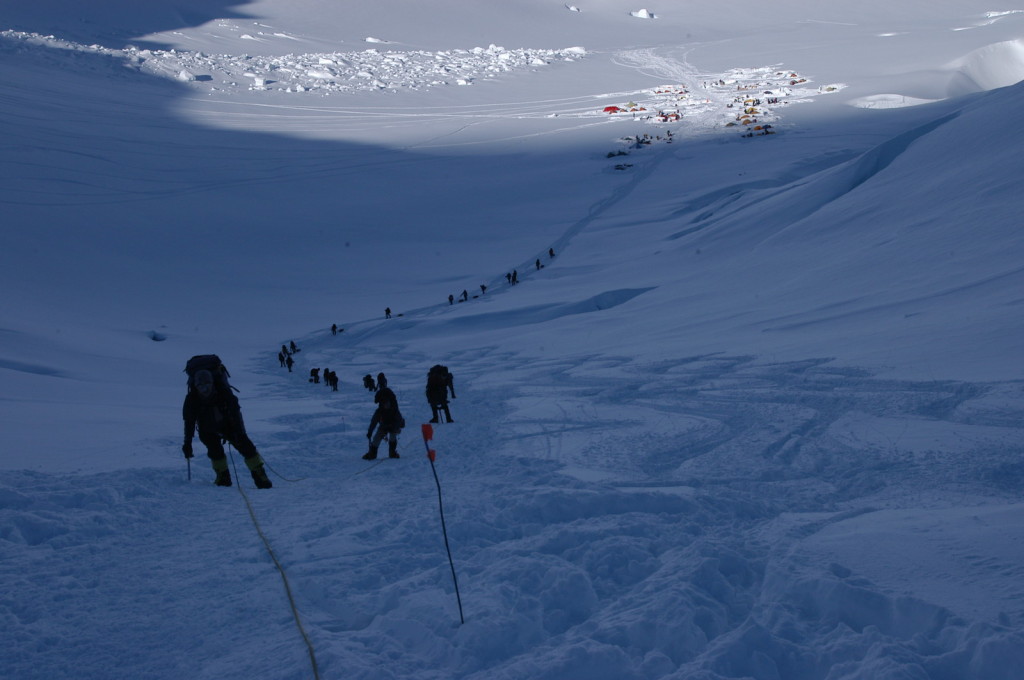 Joey Szalkiewicz is strong and keeping up just fine with the more seasoned climbers. At 17 years old, he’s already carrying a 60 lb pack successfully up the mountain. 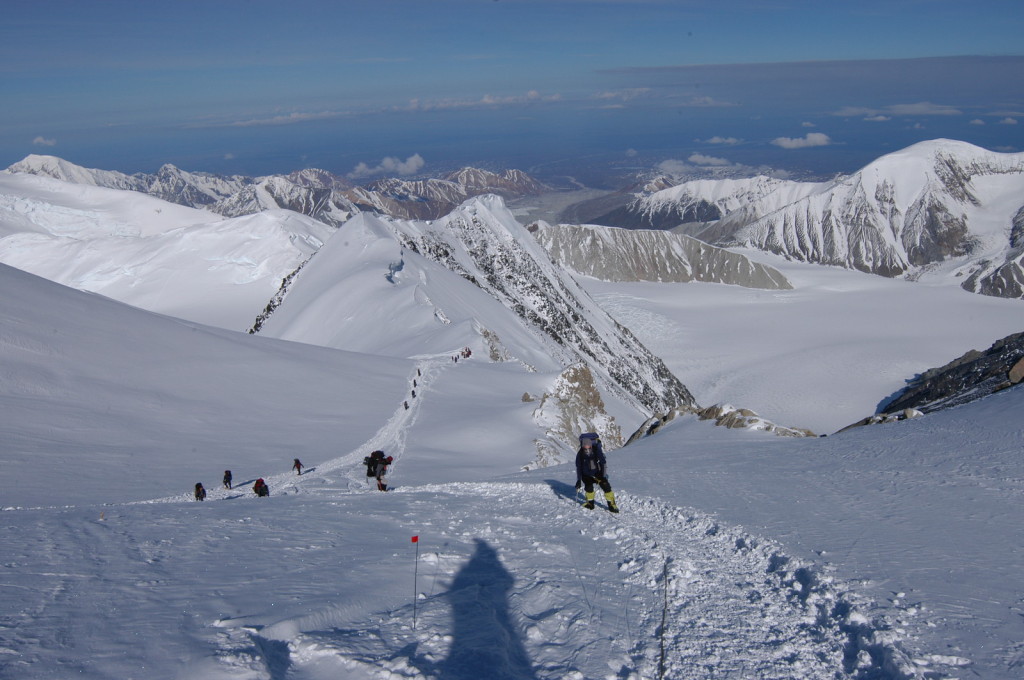 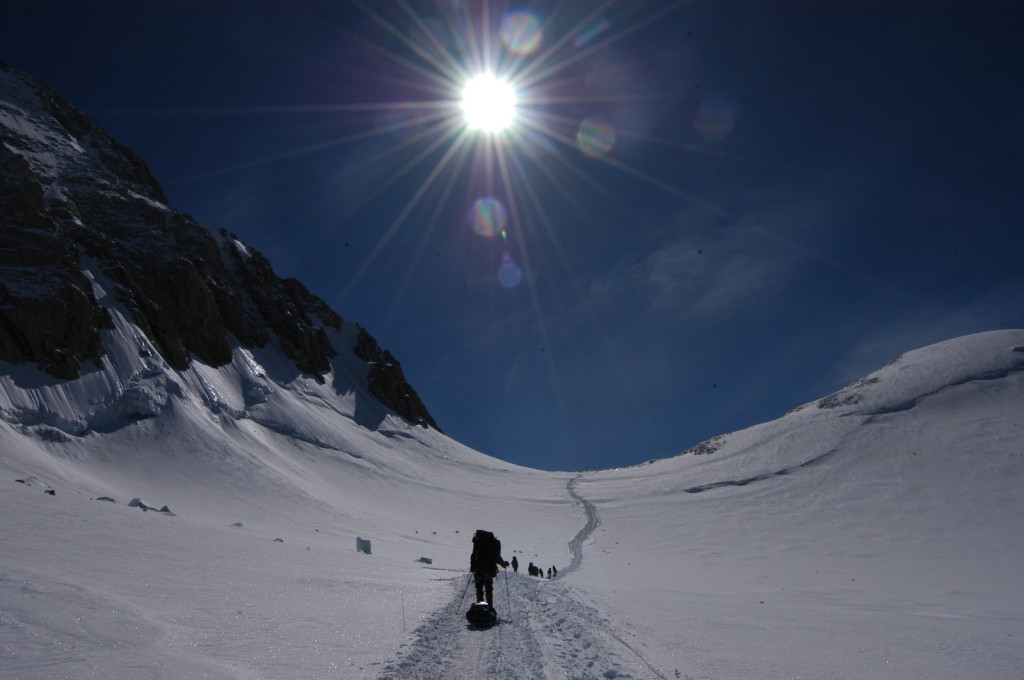 At 12500’ traveling above Squirrel Hill towards Windy Corner

Kurt Wedberg checked in today saying that the group is about 3 to 4 days from the summit, weather permitting. “The team is strong & healthy & having a great time. Weather’s been clear lending to spectacular views of the Alaska Range.  After 8 days of climbing & establishing camps we’re @C3 @14200′. 2moro we are planning on a well earned rest b4 setting our sites on moving to High Camp @17200. Thinking about our loved ones, family & friends. Thanks for all your support :)” 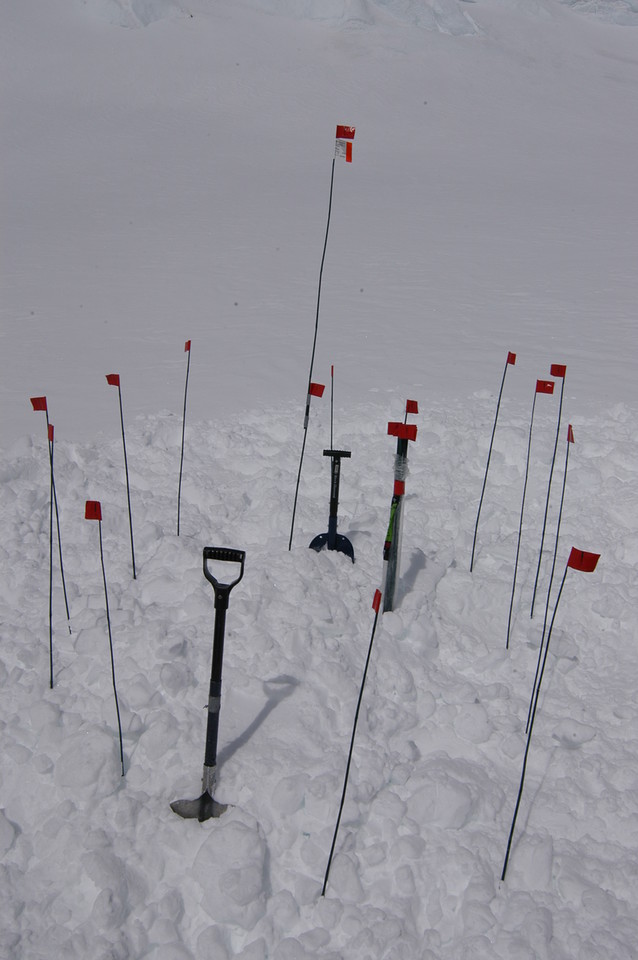 Stay tuned for an update on Wednesday! 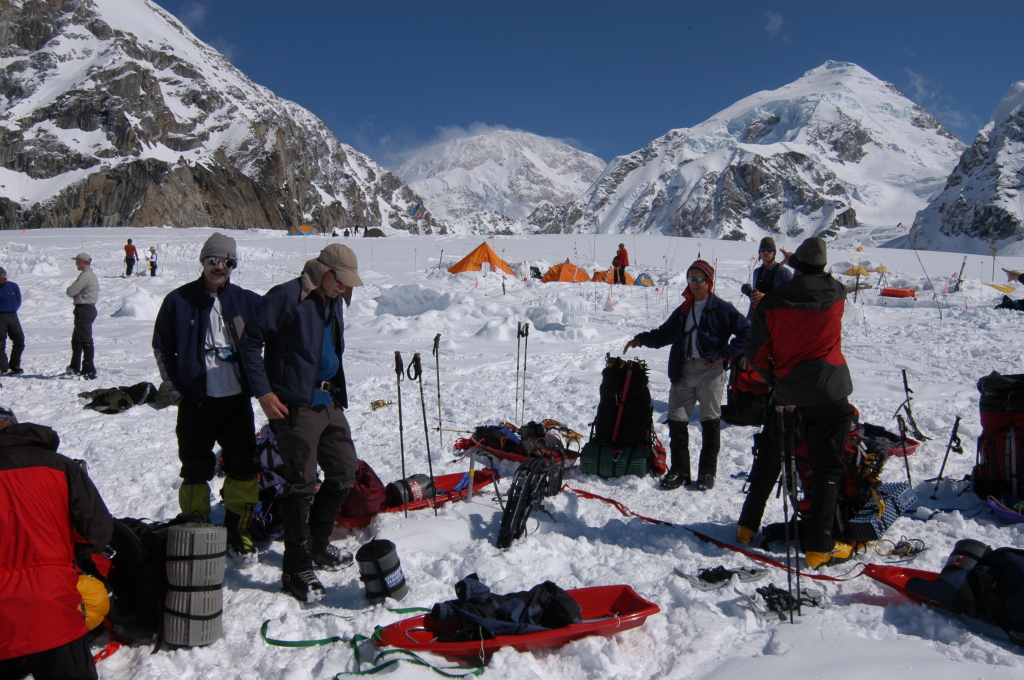 Organizing loads at Base Camp at 7200’

The 2015 Denali team is right on track and feeling good! 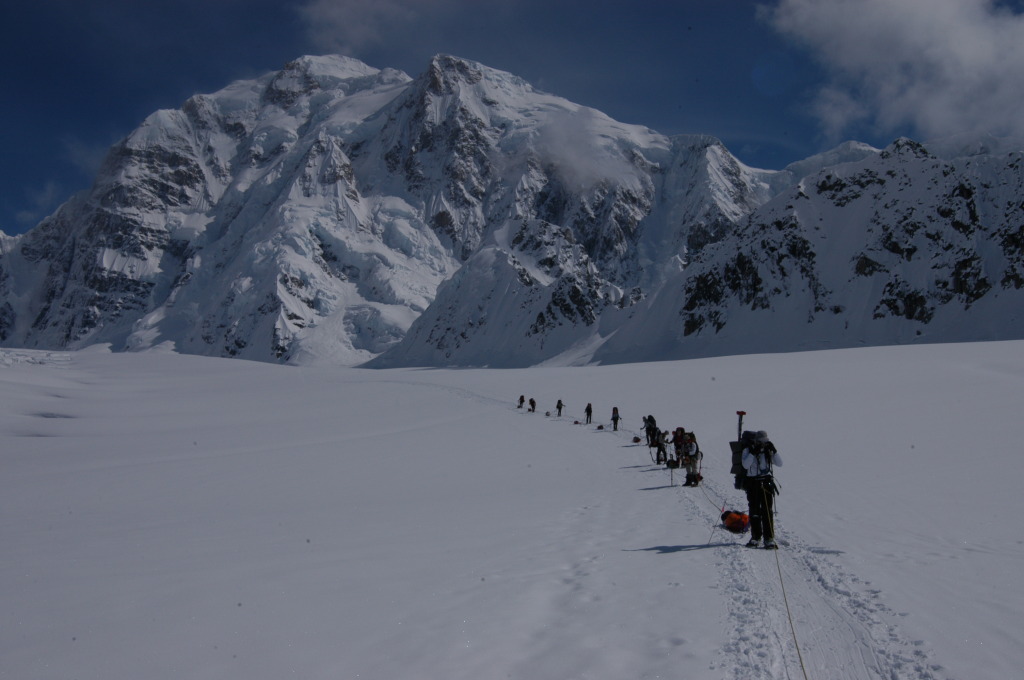 On Friday, they landed on the Kahiltna Glacier and began their progress. 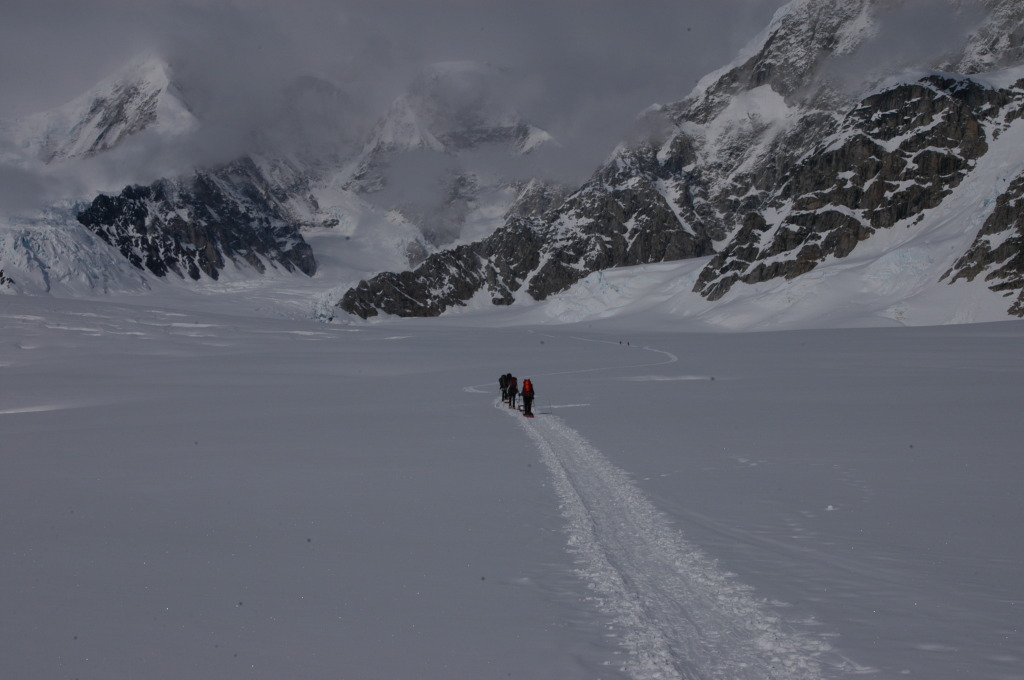 Traveling on the Kahiltna Glacier en route to Camp 1

On Saturday, the team carried to 9500′ and on Sunday , Kurt checked in saying “4 days after landing in the Alaska Range our team has carried supplies to Camp 2 @11000′. The team’s strong & psyched! ” 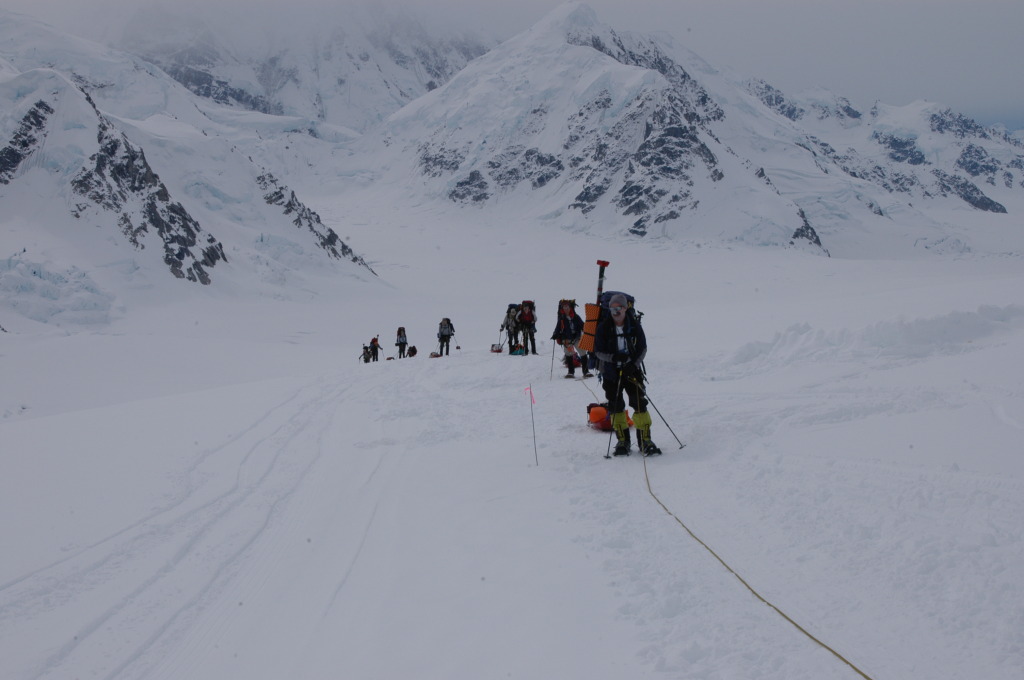 On Ski Hill above Camp 1 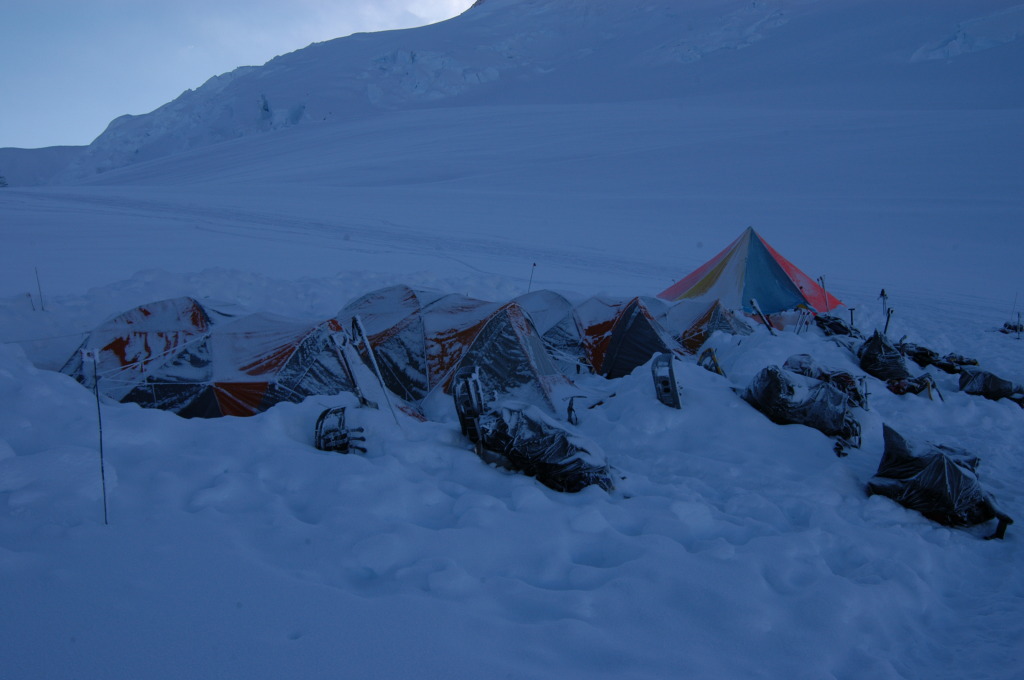 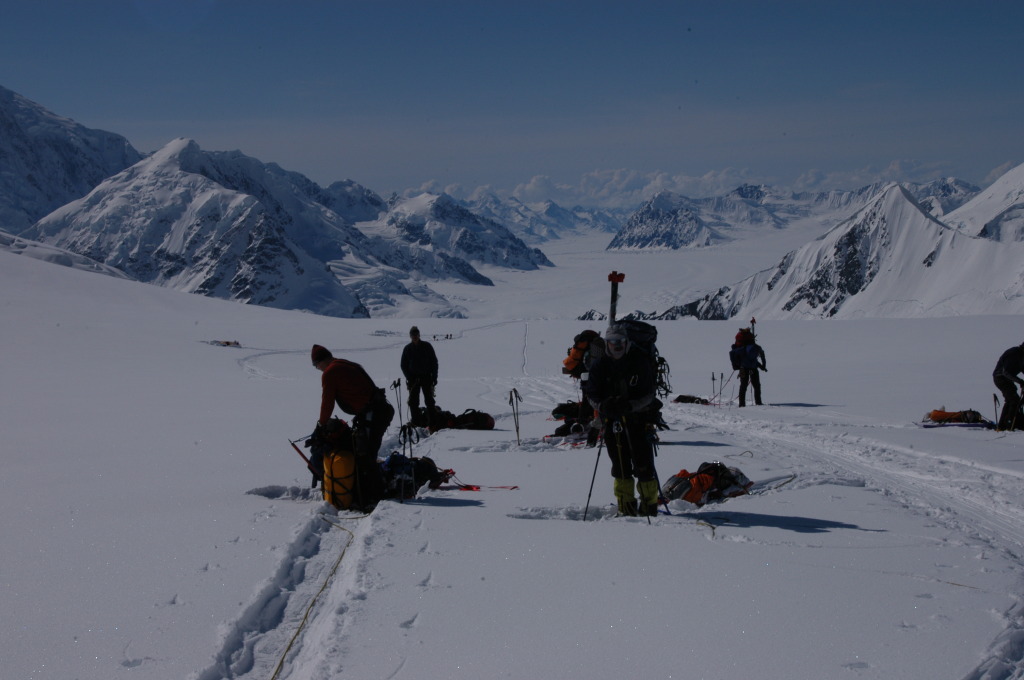 Beautiful day traveling on the Kahiltna Glacier at 10,000’ en route to Camp 3. 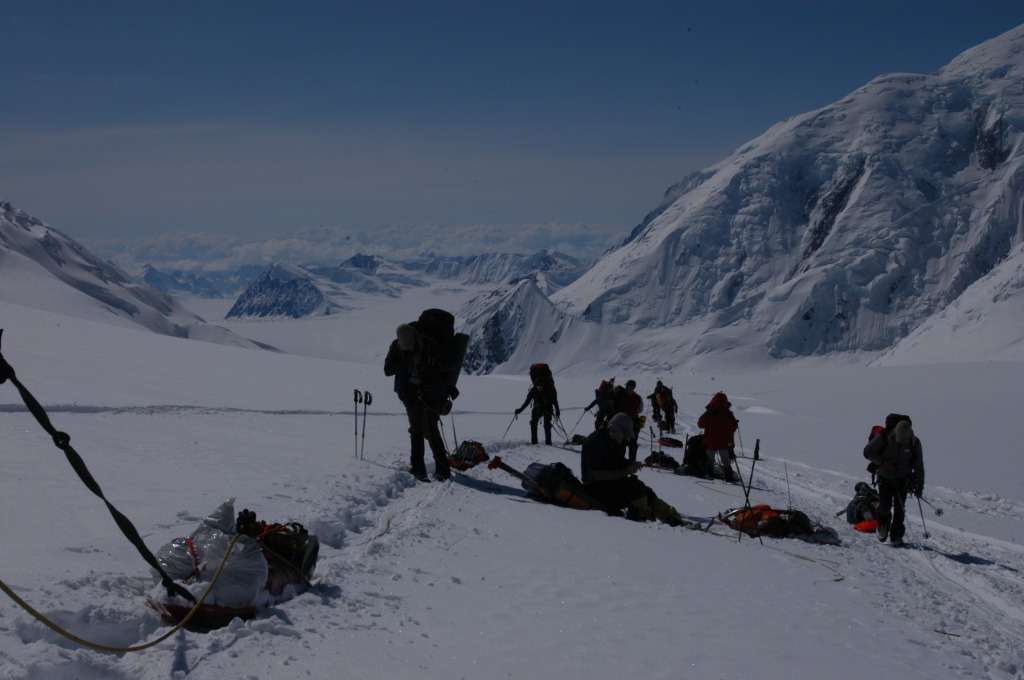 Taking a rest break on the Kahiltna Glacier

Kurt Wedberg, president and lead guide at SMI, and his 2015 Denali Team found a break in the weather to fly onto the Kahiltna Glacier today from Talkeetna, AK. 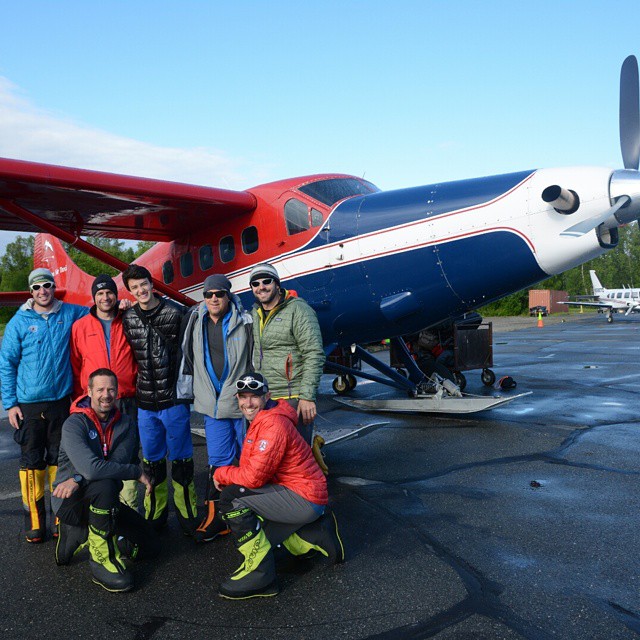 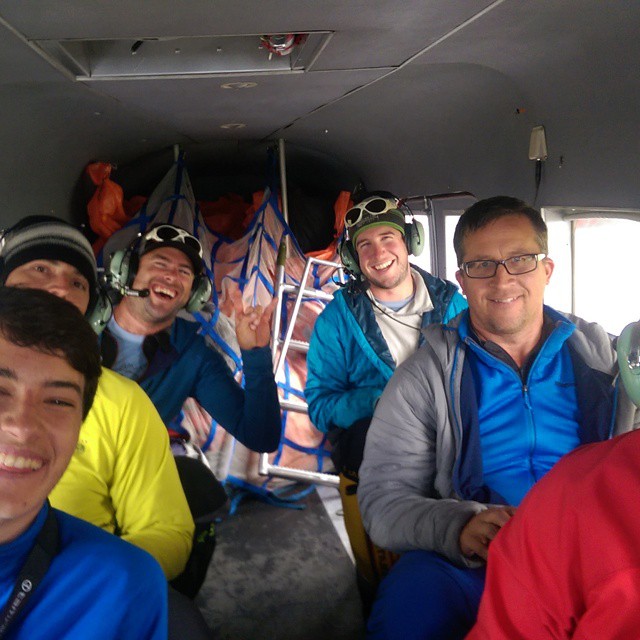 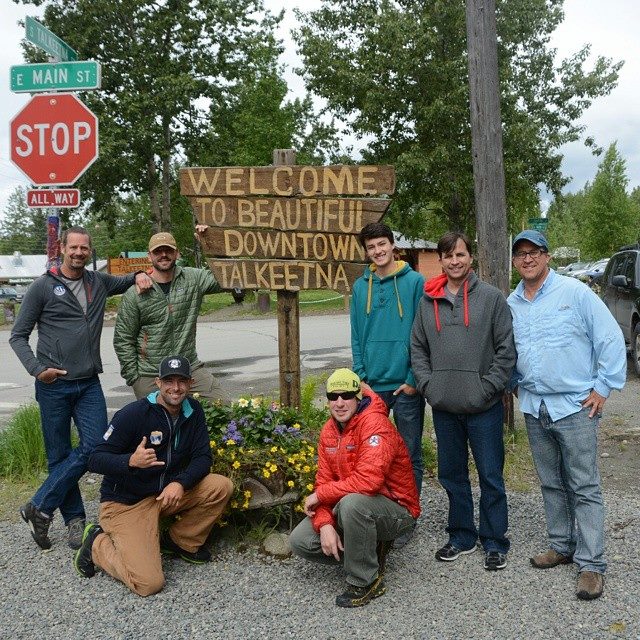 The team has been taking it easy and fueling up on the local Talkeetna fare, awaiting their window to fly out today. Oh yes, and they’ve been doing lots of gear checks and packing. 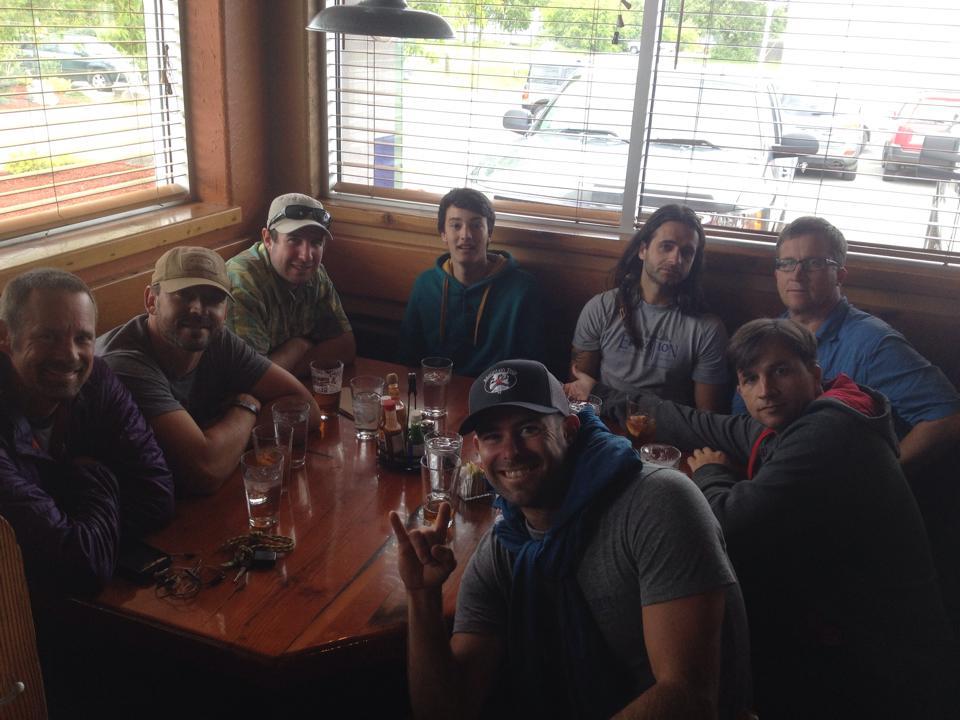 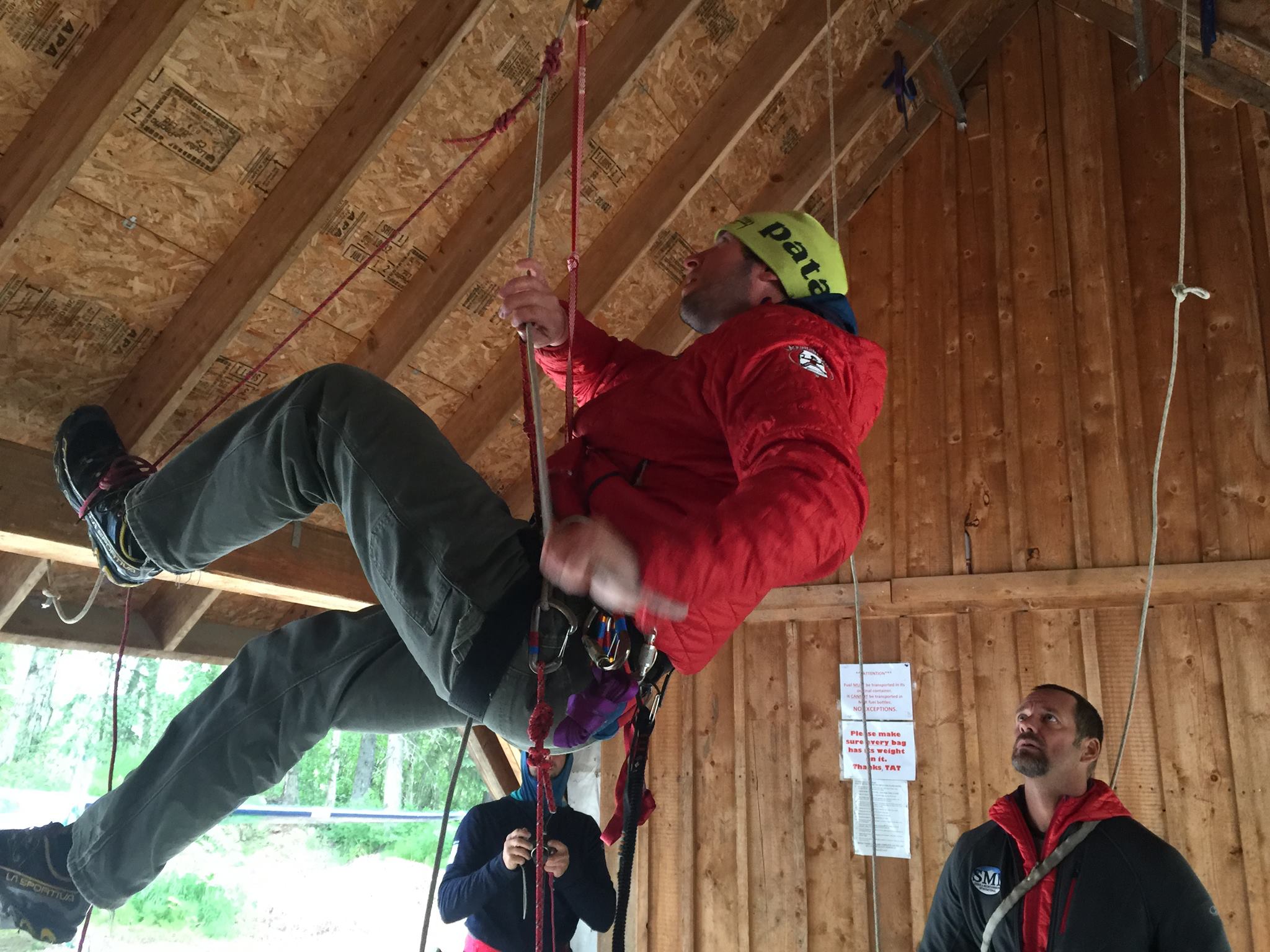 The group is currently at Base Camp 7,200 ft. Next they will be packing and prepping to make the trek to Camp 1.

Keep them in your thoughts and prayers for a happy summit and stay tuned for updates!

This is a recap of a Mt. McKinley expedition that SMI founder Kurt Wedberg was a part of.  A few pictures are below.  The entire photo gallery can be found here:  http://www.kurtwedbergphotography.com/Alaska/Mt-McKinley-May-2011/17141713_rx4KXV

After flying in to Anchorage the team drove to the town of Talkeetna, which is the jumping off point for expeditions into the Alaska Range.  Talkeetna translated from the native language means “river of plenty” and is located where the Chulitna, Susitna, and Talkeetna rivers converge.  Having less than 1000 year round residents this town is a destination for mountaineers, salmon fisherman, rafters, and tourists taking scenic flights over the Alaska Range.  Here in Talkeetna we organized our equipment and took care of pre trip logistics including meeting with the National Park Service for the briefing they give all teams before starting their expeditions. Bill organizing personal gear to be used on the expedition.

Bill and Finn at the National Park Service briefing.

On May 4 the team took all their equipment to Talkeetna Air Taxi and loaded into two de Havilland Beaver airplanes equipped with skis for the 45 minute flight into the Alaska Range where they landed on the SE Fork of the Kahiltna Glacier at 7200’/2195m.

Matt and Bill in the Beaver ready to fly.

The flight into Base Camp offers many dramatic views of the peaks in the Alaska Range. Scenic flights of this range are popular among the many tourists that visit this area. View of the lower Kahiltna Glacier during the flight to base camp. Bill at Base Camp with the landing strip on the SE Fork of the Kahiltna Glacier on the left. Behind is Mt. Foraker. At 17,400'/5304m it is the 6th highest mountain in North America rising over 10,000'/3048m above Kahiltna Base Camp.

At Base Camp the team set up camp and organized gear and supplies for the expedition.  A cache was left here with 3 days worth of food and fuel for the return trip in case weather caused a delay in the planes picking us up.  On May 5 we loaded up rucksacks and sleds with 20 days worth of food and fuel plus personal gear and clothing.  We descended the SE Fork to 6800’/2073m then turned north up the Kahiltna Glacier.  This glacier is 33 miles/53km long and over 1 mile/1.6km wide in places.  On either side of the glacier rise peaks that reach several thousand feet above.  Climbers are dwarfed to little black dots in an immense landscape which gives a sense of awe and humility in this dramatic scenery.  The team traveled to 7800’/2377m where Camp 1 was established. Mt. McKinley as seen from Base Camp.

May 5: Bill and Finn geared up and ready to start the journey from Base Camp.

Bill and Matt with sleds in tow in the middle of the massive Kahiltna Glacier.

Finn getting ready to take a rest break next to Matt (seated left) on the Kahiltna Glacier.

Gary Talcott enjoying the days walk along the Kahiltna Glacier.

Tom Hargis at a carefully chosen safe spot for a rest break on the Kahiltna Glacier. After probing out a safe zone on the glacier platforms were leveled to set up tents at Camp 1 at 7800'/2377m.

Bill and Matt checking out the scenery and the route above en route to Camp 3. Behind Matt is Tom Hargis and Finn Wentworth.

From Camp 3 the terrain begins to steepen and the views continue to get more dramatic.  The next step in the expedition is to carry gear to a cache at 13,500’/4115m and return to Camp 3 to sleep.  Then we move to Camp 4 at 14,200’/4328m.  The following day we make a short trip with empty packs to retrieve our cache.  From Camp 3 we switch from snowshoes to crampons and swap ski poles for ice axes.  The terrain getting to our cache site involves climbing Motorcycle Hill (35+ degrees), Squirrel Hill (35+ degrees), then we traverse across the Polo Fields, which leads us to the final hill below Windy Corner at 13,300’/4054m.  We were treated to the most clear days of the expedition during these next few days.  As far as the eye can see to the north we saw views of the Alaskan tundra. Decorating our view in every other direction we saw countless peaks in the Alaska Range.  Breathtaking scenery, calm winds, and clear skies made for some unforgettable days of climbing!

View of Mt. Foraker (left) and Kahiltna Dome from Camp 3.

Bill and crew climbing Squirrel Hill with the Peters Glacier and the Alaskan tundra in the background.

Bill psyched to be topping out on Windy Corner on a clear windless day! Kurt on the descent from Windy Corner with an empty pack.

Matt and Bill descending Motorcycle Hill after our carry day.

Camp 4 with the Orient Express Couloir and West Rib behind.

The team stacking blocks to make walls around our camp. The team at Camp 4 after building walls for our camp. This camp offers an excellent view of Mt. Foraker behind.

Kurt and Bill enjoying a hot drink in their tent.

Finn and Bill in the dining tent.

After being on the mountain for two weeks the team was acclimatizing well and getting ready to move to our high camp at 17,200’/5243m.  Winds began to increase and we then learned of impending weather.  High winds were forecast to reach over 70mph on the summit and predicted to last for several days.  This didn’t bode well for a safe attempt at reaching the summit.  The team discussed the situation and decided to descend rather than trying to wait it out.

This expedition was a great success on many levels.  The team stayed safe which is the first goal on all our trips.  Everybody also learned a lot about mountaineering and about themselves.  We also all returned friends and with a new perspective on the world around us.  Whether or not team members decide to return to give Mt. McKinley another attempt this was definitely a great adventure and another trip of a lifetime.  Thanks everybody for a great trip!

Thanks everybody for a great trip!

The entire team is safely off the mountain having all flown off of the SE Fork of the Kahiltna Glacier yesterday.  The expedition reached a high point of 15,500′ before turning around.  Amid several more days of high winds in the forecast that were projected to reach 70+mph and dwindling food supplies the team decided it was best to turn back.

The expedition was a success on many levels.  Above all else the entire team stayed safe and returned without a single injury.  Everybody also learned a a lot about mountaineering and about themselves.  Everybody remained friends and the adventures shared will only strengthen those bonds.

More news will be coming soon complete with pictures of another amazing adventure.  Thank you to everybody for their thoughts and prayers during our expedition!!

We received a satellite phone call from Kurt updating us on the team’s progress on Mt. McKinley.  Here’s the “quick and dirty” from Kurt at 11,000 feet!

Kurt noted that the weather has been unusually cold, with a high of -35 degrees at 17,000’ the other day!  Despite the cold weather and high winds, the team is in good spirits.  Everyone on the team is doing very well and enjoying the experience.

A recovery and rescue were made on Mt. McKinley earlier this week, and while none of our team members were part of this effort, our thoughts go out to all those involved.

Kurt says that everyone at home is missed and thanks all of you for the support you send toward SMI.  We look forward to hearing from Kurt again in a few days!