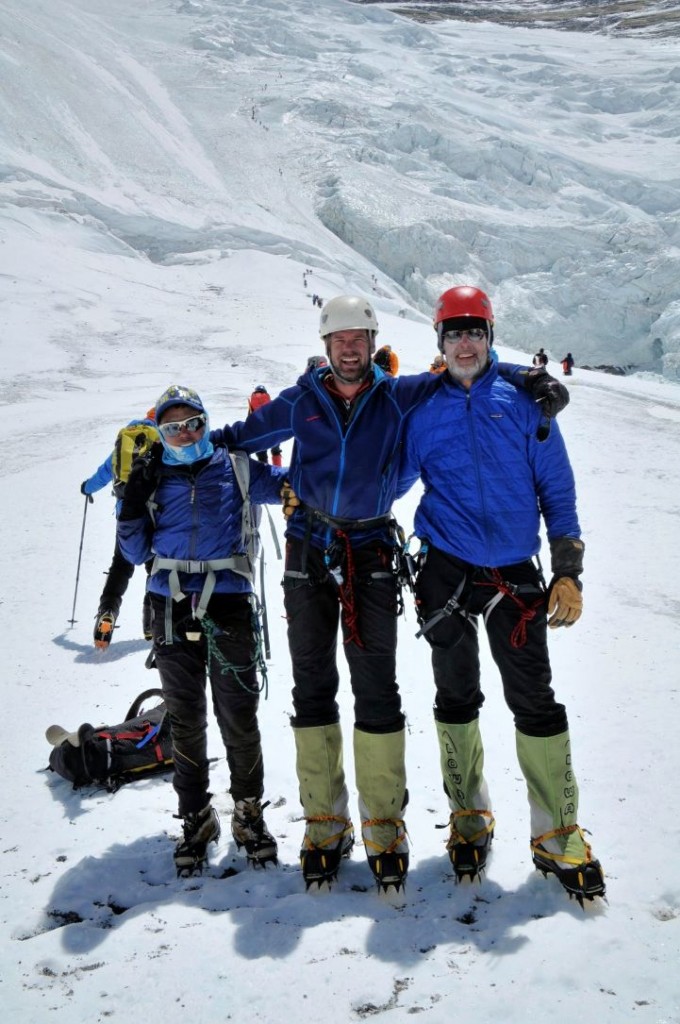 Kancha Nuru Sherpa, Kurt Wedberg, and Fred Simmons near the base of the Lhotse Face during an acclimatization day hike on May 1. 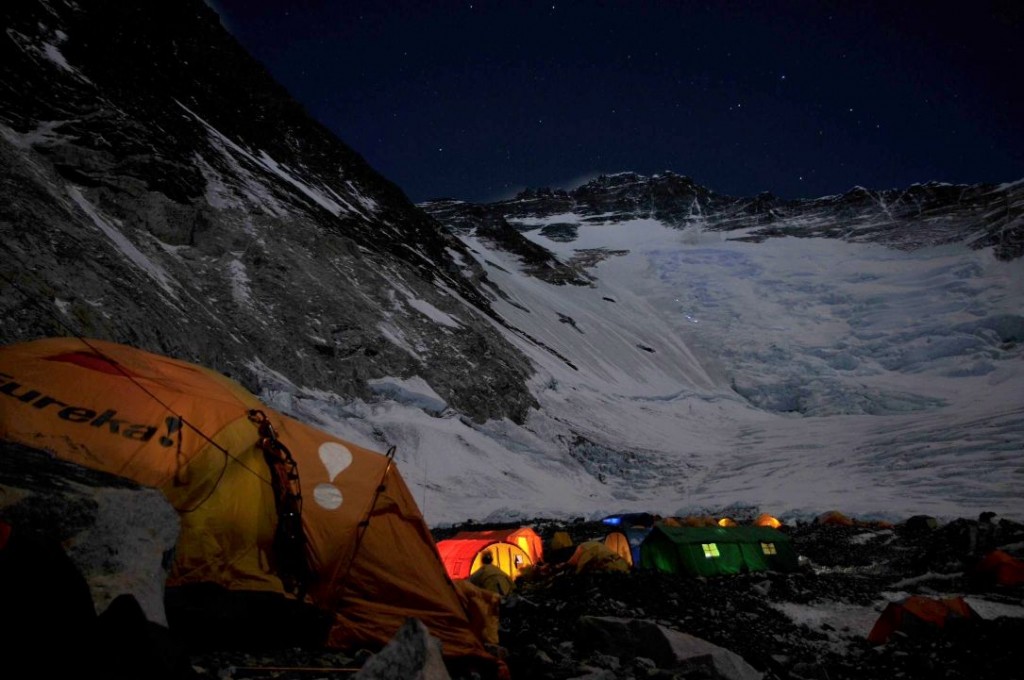 Camp 2 and the Lhotse Face at night. Look closely and three headlamps are visible at Camp 3.

It is snowing in Base Camp today May 5 as we write this. After spending several days sleeping up high we are safely back to rest and recuperate. We started off on schedule on April 28 and moved straight up to Camp 2 at 6495m/21,309′. Our plan was to rest a day, then take a couple day hikes, followed by a move up to Camp 3 at 7406m/24,300′ to sleep.

We acclimatized well at C2 and after three nights we were ready to move up to C3. We nixed that plan when we got to the base of the Lhotse Face, which is the next portion of our route. It turns out the Everest region is very dry right now. It hasn’t received much snow from the past winter. Normally the face would be solid firm snow but instead it is hard ice. Additionally, rock faces above that are usually frozen and covered in snow are now exposed with loose rock. Rocks are coming down the slick icy Lhotse Face at high speeds. We didn’t think it safe to ascend it in these conditions so we didn’t. Concerns were shared among several guides who were at C2. A bunch of us got together for a meeting to discuss route conditions and options. We decided a few people who were still fresh would explore a different way up to C3. The good news is a route was found to the lower end of C3 and a small party anchored fixed line into that area. We spent one more night at C2 then returned to Base Camp.

Our four nights we spent in total at C2 were productive. We got noticeably stronger each day and stayed healthy the entire time living at 6495m/21,309′ and above. In spite of falling short of reaching C3 we feel that after our time up high followed by a few days rest at Base Camp we will be ready to make a summit attempt. Before trying for the summit though we also need a big change in the weather pattern. The upper reaches of Mt. Everest have been pummeled by 120+ mph winds for several weeks now. With conditions like this a summit bid isn’t realistic. We also need some fresh snowfall; preferably 1′-2′. This would offer some anchoring of the slopes containing loose rocks. Fortunately our forecast over the next dew days is calling for just that; decreased winds and snowfall through May 10. Let’s hope the weather forecast is correct!

Up until this point our expedition has gone according to plans almost as smooth as clockwork. This is the first time we have encountered any amount of resistance from the mountain. In mountaineering there are things you can control and others you can’t. Our strategy now is to take care of the things we can control and set ourselves up for success should Mt. Everest present an opportunity to climb it. We are back at Base Camp resting, hydrating, recuperating, getting strong after spending time up high, staying healthy, and are preparing ourselves physically and mentally for a summit attempt. In spite of the conditions we recently encountered we are optimistic we will have an opportunity make a summit attempt soon! Thanks to everybody for your continued prayers and support. Your comments on the blog are awesome too! We will try to update you as soon as conditions on the mountain shake out over the coming days and we have our next plans in place.

Here are a few pictures from the last few days: 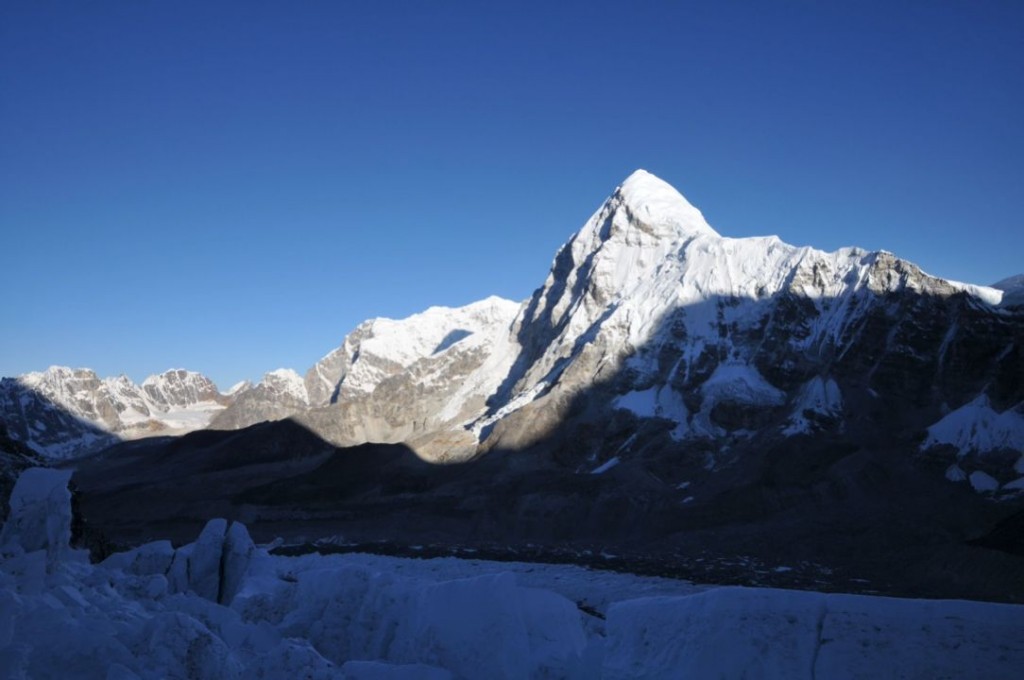 April 28, 6am: Looking back from the lower Khumbu Icefall at the early morning light on Pumo Ri (7165m/23,507') rising high above Everest Base Camp still in shade below.

April 28: Fred crossing a crevasse at the top of the Khumbu Icefall en route to Camp 2. 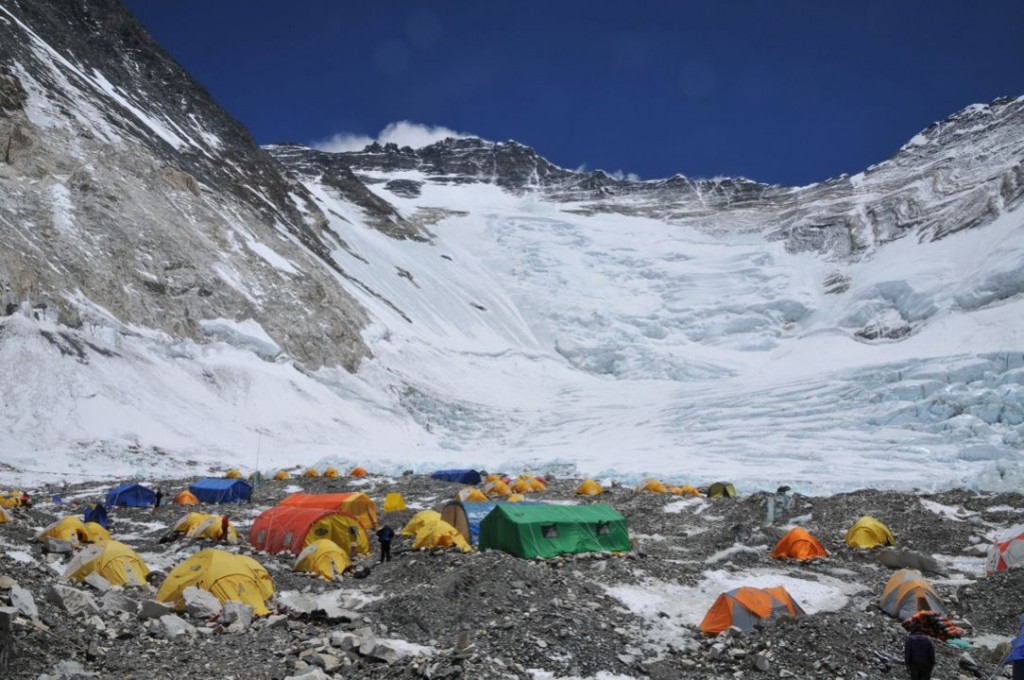 Camp 2 with the Lhotse Face behind. 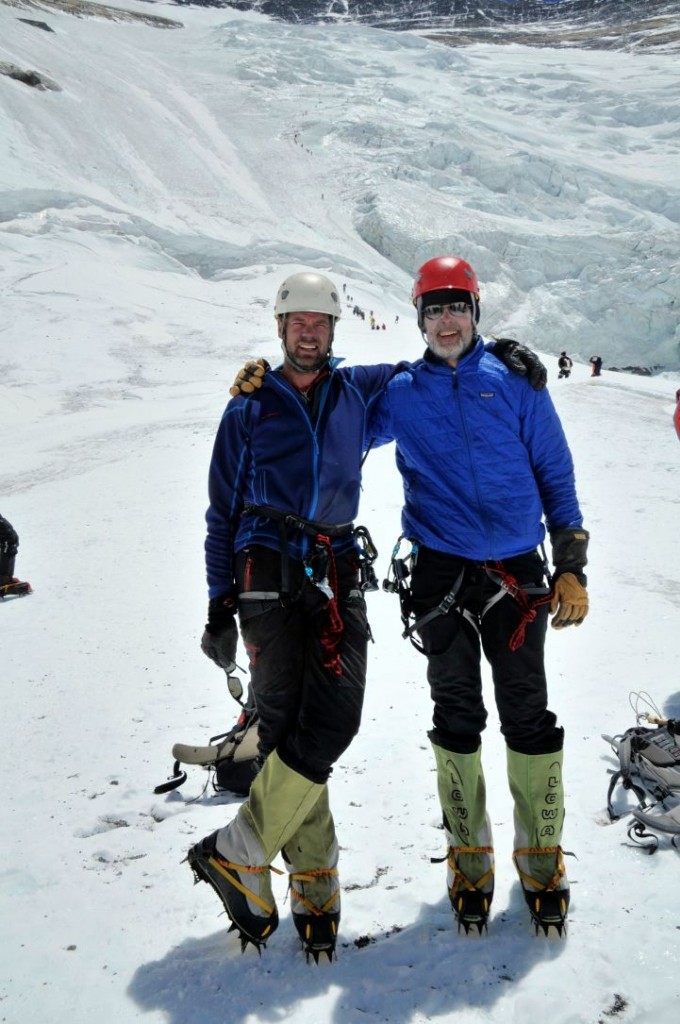 May 1: Kurt and Fred near the base of the Lhotse Face. The people in between their heads behind was as close as they were willing to get to the face without being exposed to rock fall from above. 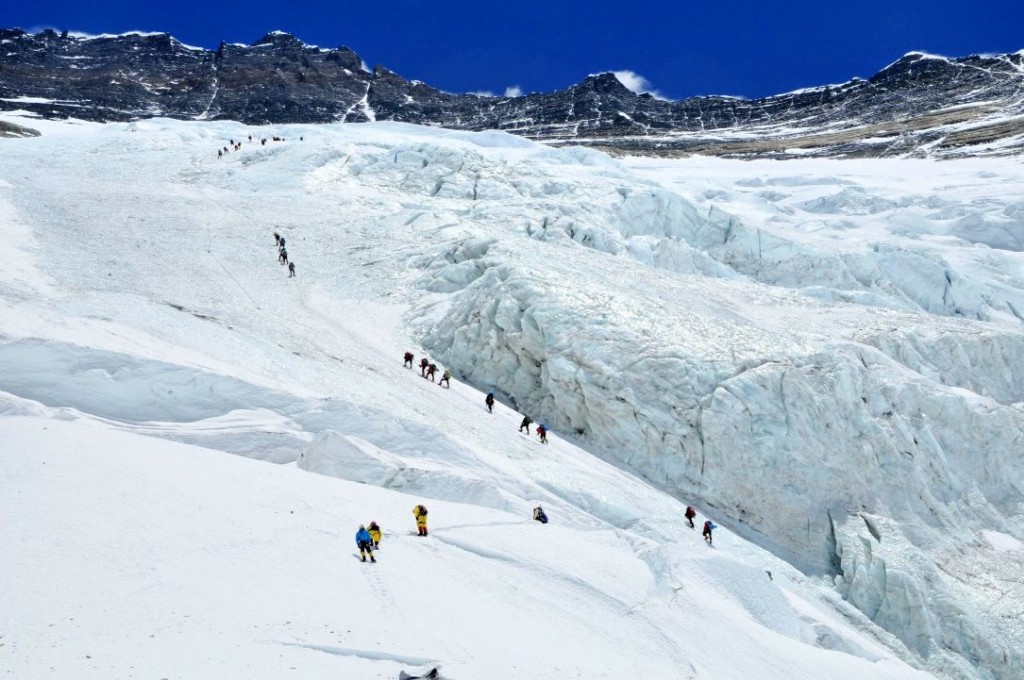 Climbers starting up the Lhotse Face in spite of constant rockfall. The source of the rockfall is from the Geneva Spur out of the photo to the left. Rocks small and large were raining down at a rate of 2+ per minute. These climbers were yelling "rock" while they slowly ascended completely exposed to the barrage. 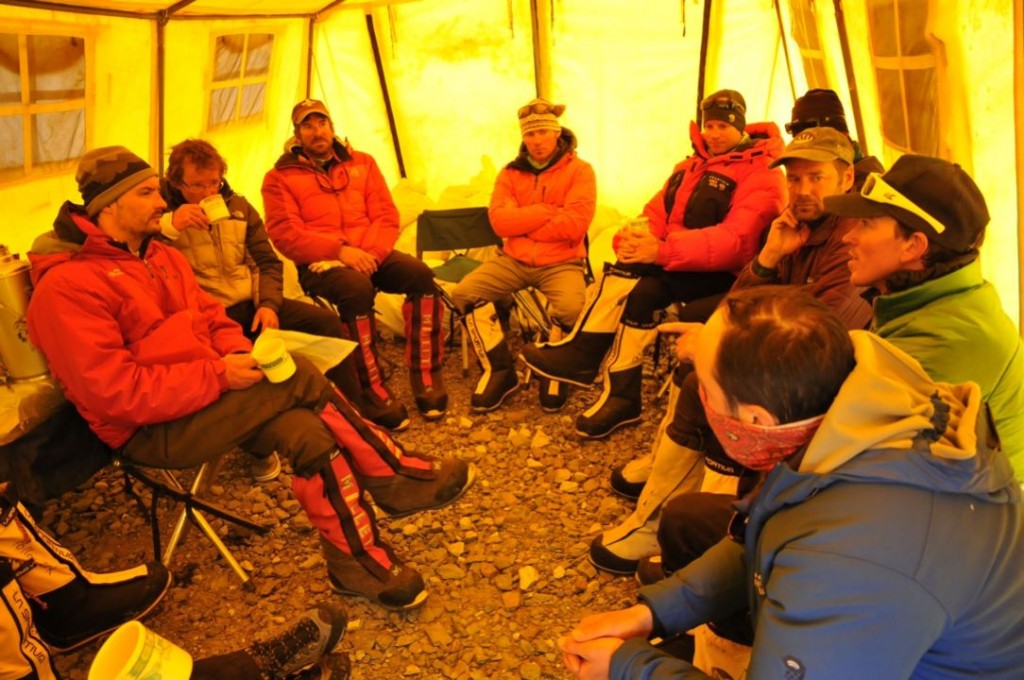 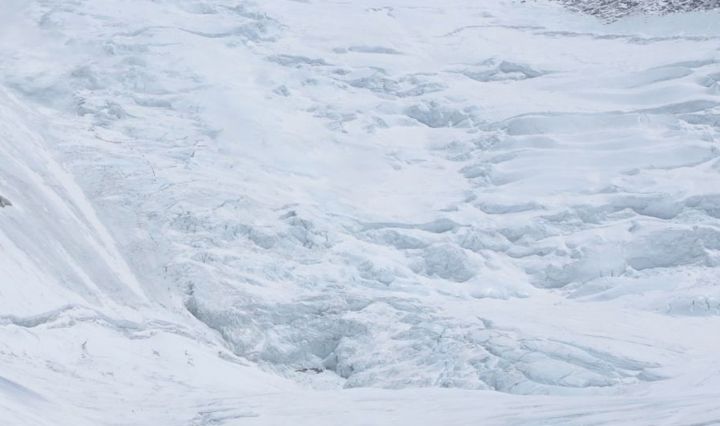 This cut away photo of the Lhotse Face attempts to show the old and new routes to Camp 3. The new route starts at the lower right of the photo and ends on the upper left. The location of the route exposed to rockfall starts on the lower left of the picture where the large horizontal crevasse ends on the right. 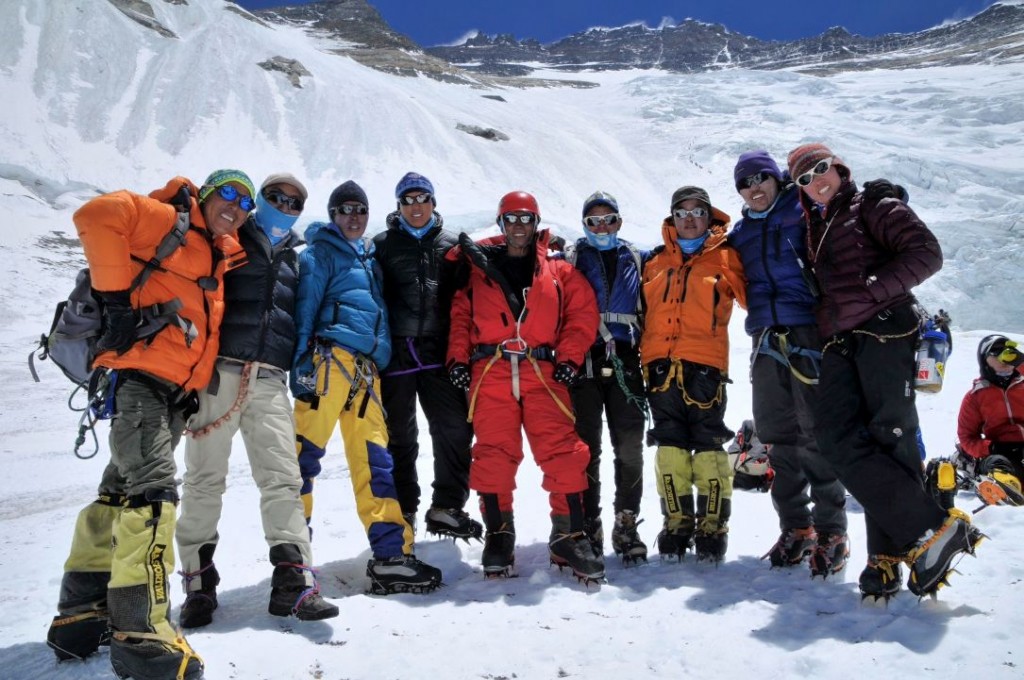 Some of our crack group of Sherpa's. There are no stronger people on the planet at extreme high altitude. Some of them will assist in carrying loads to our high camps and some will climb along side our team members on our summit attempts. From left to right: Pasang, Pemba, Cheten Dorjee, Phinjo Dorjee, Nima Nuru, Kancha Nuru (Phortse), Dasona, Phura Ongel, Kancha Nuru (Pangboche). 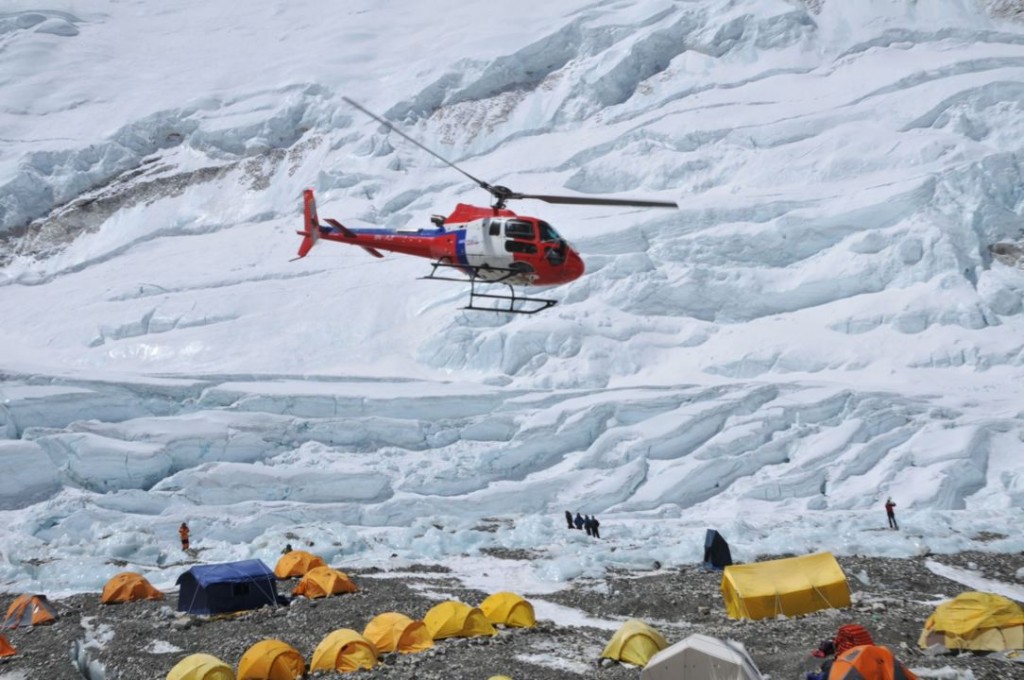 A helicopter hovering above Camp 2. Since the 1996 disaster on Everest it hasn't been until now that a helicopter can reliably reach this camp. The helicopter took two test flights with separate pilots taking turns at the controls. The following day they flew to 7600m/24,934'!!! 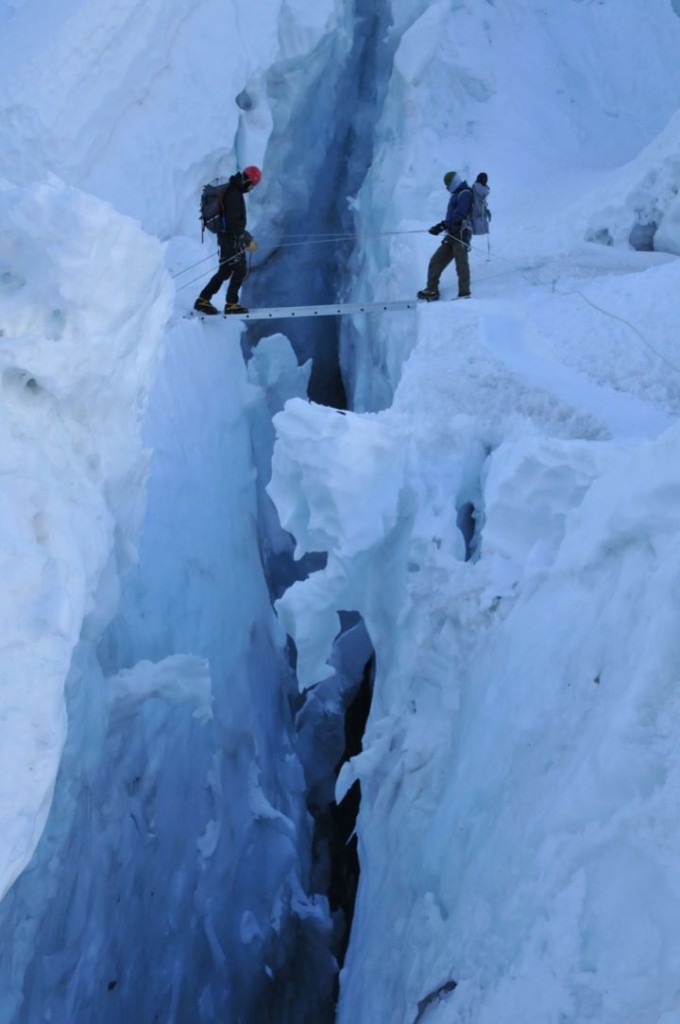 May 2, 7:30am: Fred crossing over a deep crevasse on a ladder in the Khumbu Icefall on our descent back to Base Camp. 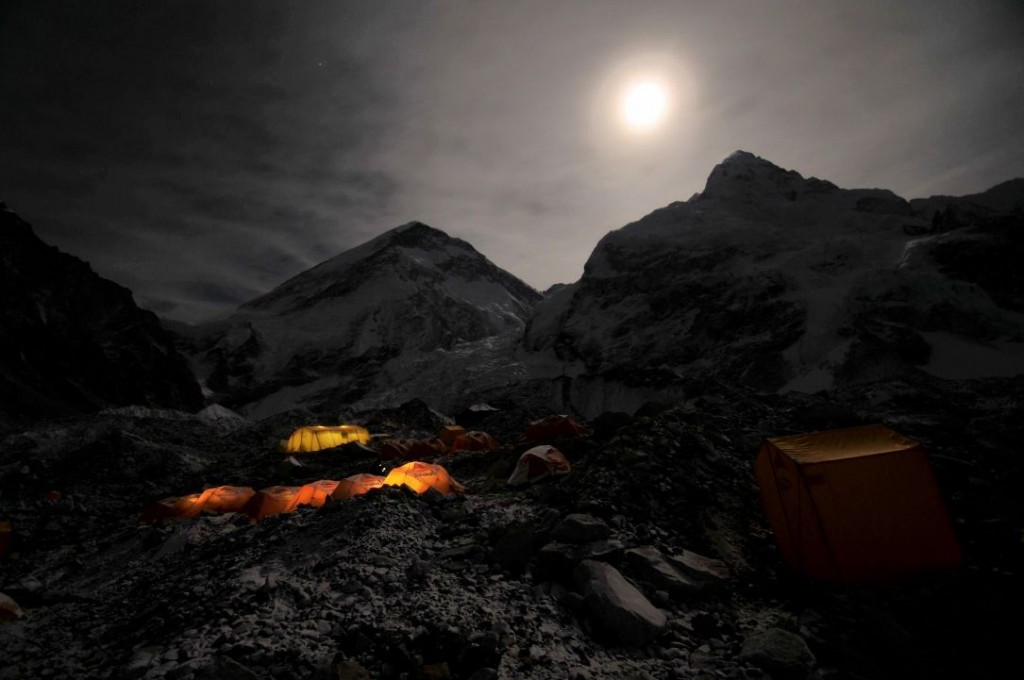 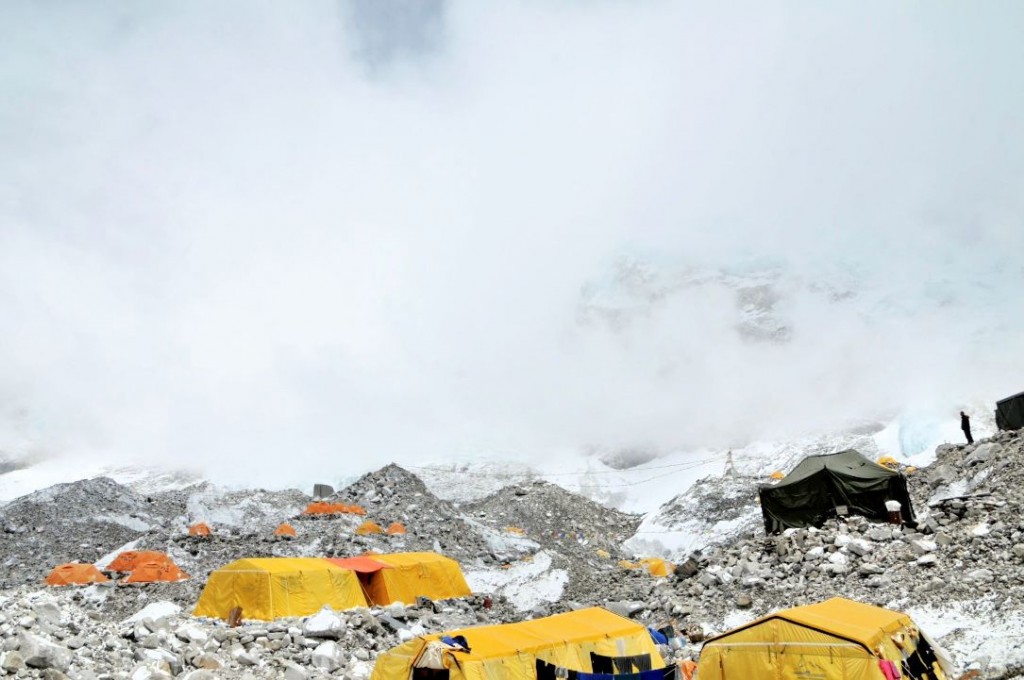 May 5: The entire Mt Everest massif is shrouded in clouds as a storm brings much needed snow to the upper flanks of the mountain. This should help improve climbing conditions up high.

18 comments on “Everest Team Safely Returns From Acclimatizing Up High”