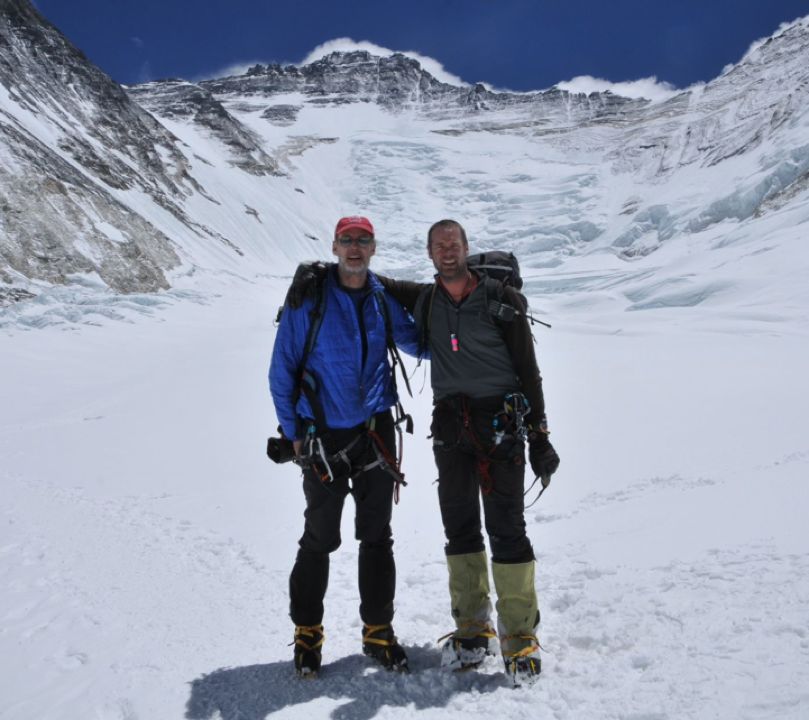 Fred and Kurt in the Western Cwm.

Greetings from Everest Base Camp!  We are safely back here after spending four nights at Camps 1 & 2.  On April 19 we had a pre dawn breakfast and left EBC at 4:45am.  We navigated a short way by headlamp then put on our crampons and began climbing through the Khumbu Icefall.  After several previous acclimatization climbs we had become a very efficient climbing team and it showed as we made it past the Icefall and all the way to Camp 1 in a very respectable 4 1/2 hours arriving at 9:15.
.
Our goal by sleeping at Camps 1 & 2 was to continue the acclimatization process by living for a few days at higher elevation.  We spent the rest of April 19 doing just that.  We hydrated, read books, and generally relaxed as our bodies adjusted to this new elevation.  We had previously reported Camp 1 to be at 6120m.  After being there we are readjusting that elevation to 6100m/20,012′, which was still the highest altitude we had reached during the expedition up until then.
.
On April 20 we climbed to Camp 2 at 6495m/21,309′ then returned to Camp 1.  Our route to Camp 2 takes us farther up the Khumbu Glacier through an area we call the Western Cwm (pronounced “coom”).  The terrain levels out significantly over what it is in the Icafall.  We crossed a few ladders that bridged deep crevasses but overall found the route to be straightforward posing no real problems.  The scenery in the Western Cwm is spectacular. Dominating our view was Lhotse, the 4th highest mountain in the world at 8516m/27,939′.  Dramatically rising above the Western Cwm almost 6000′ to its summit is the Lhotse Face.  Later in the expedition our route from Camp 2 to 3 will take us directly up this face.  The summit of Mt. Everest also reveals itself (to the left of Lhotse) during our climb to Camp 2.
.
The Western Cwm is a big valley with walls rising several thousand feet on three sides.  Solar radiation in the Cwm creates a dramatic rise in air temperature that can make climbing through it uncomfortably hot.  To combat this we left Camp 1 at 6:45am while the Cwm was still in shade.  By the time the sun reached us after 8am we were well on our way to Camp 2.  Arriving at our destination three hours after departing we relaxed, hydrated, and had an early lunch before returning to Camp 1.
.
On April 21 we moved up to Camp 2.  We had received a weather forecast calling for the jet stream to make a significant drop in elevation which would threaten to give us high winds over these days we had planned to spend at Camp 2.  “Weather forecasts” are just that though; they’re forecasts.  To rely solely on them without using good mountaineering sense and judgment is a good way to shortchange your climbing team.  Also, we have no idea how hard the winds would blow.  Given that we had all the clothing and equipment to withstand inclement weather we went ahead with our plans to move to Camp 2.  Winds went from calm to a steady 20-25 mph.  This added a wind chill to the air temperature but nothing we weren’t prepared to handle.
.
Winds stayed steady all day and all night with occasional gusts hitting 60+ mph.  On April 22 we decided to stay with our plan to take an acclimatization hike towards the base of the Lhotse Face.  Our goal was to try to hit 22,000’/6700m.  We put on our clothing layers and ventured out late morning from Camp 2.  With wind gusts ranging from 10-30 mph (and occasionally stronger) we roped up on the glaciated terrain and had a nice hike.  Only a handful of climbers have ventured this high so far this season.  The winds made the hike colder and more strenuous but this only served to add additional benefit to our acclimatization.  After hitting our intended altitude we descended back to Camp 2.  Winds continued for the rest of the day and evening.
.
On April 23 we woke at 3:45am to pack up and descend to Base Camp.  We wanted to hit the Khumbu Icefall in the early morning hours.  After breakfast we put on our climbing harnesses and crampons, saddled up our rucksacks, and left Camp 2.  Early morning cold temperatures coupled with wind made for raw conditions as we started walking at 5:15am.  We moved well going downhill though and we were through the Icefall and back to Base Camp at 9:00am.
.
Warmer temperatures and relatively thicker air greeted us here.  Our plan now is to rest for the next couple days.  We will plan on moving higher and hopefully climbing the Lhotse Face on our next trip up.  We’re currently planning on leaving on April 27.
.
Here are a few pictures from our adventures over the last few days: 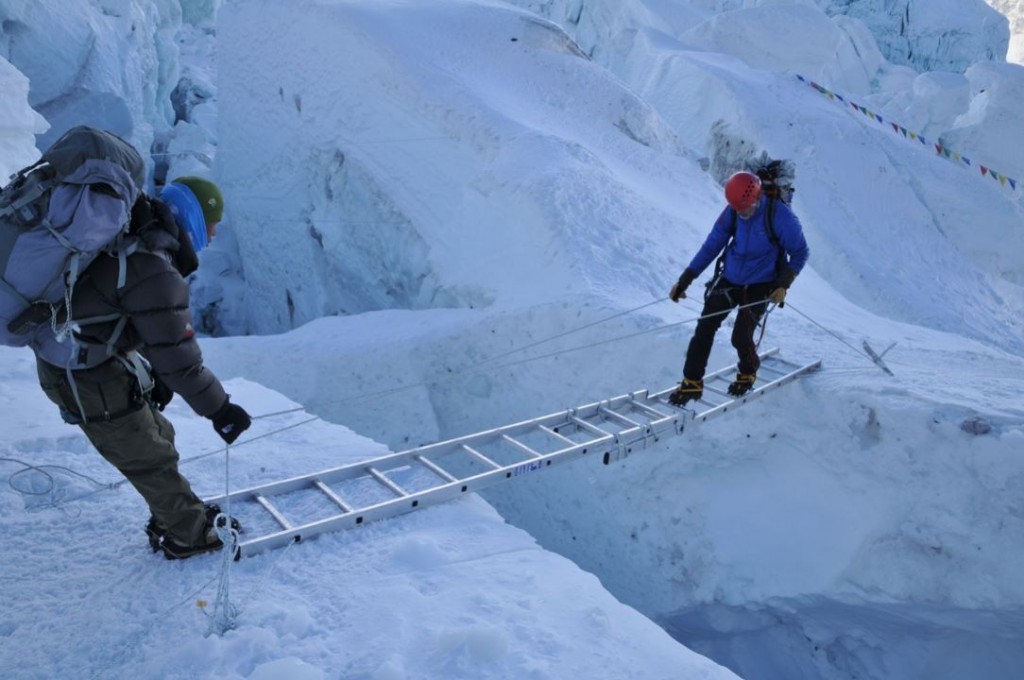 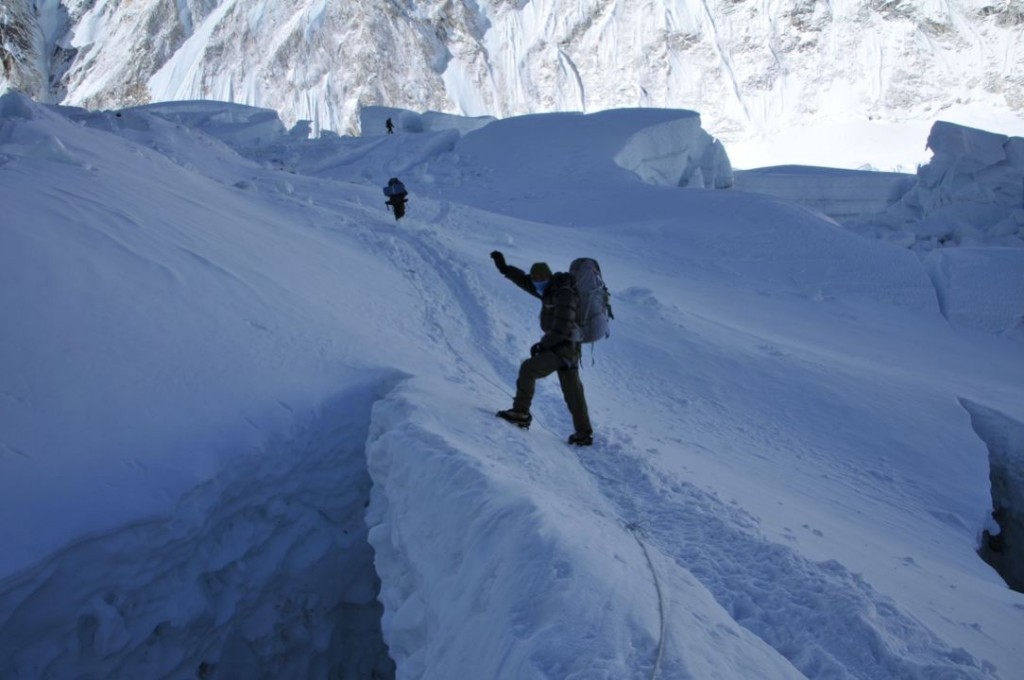 April 19: Kancha Nuru Sherpa near the top of the Khumbu Icefall 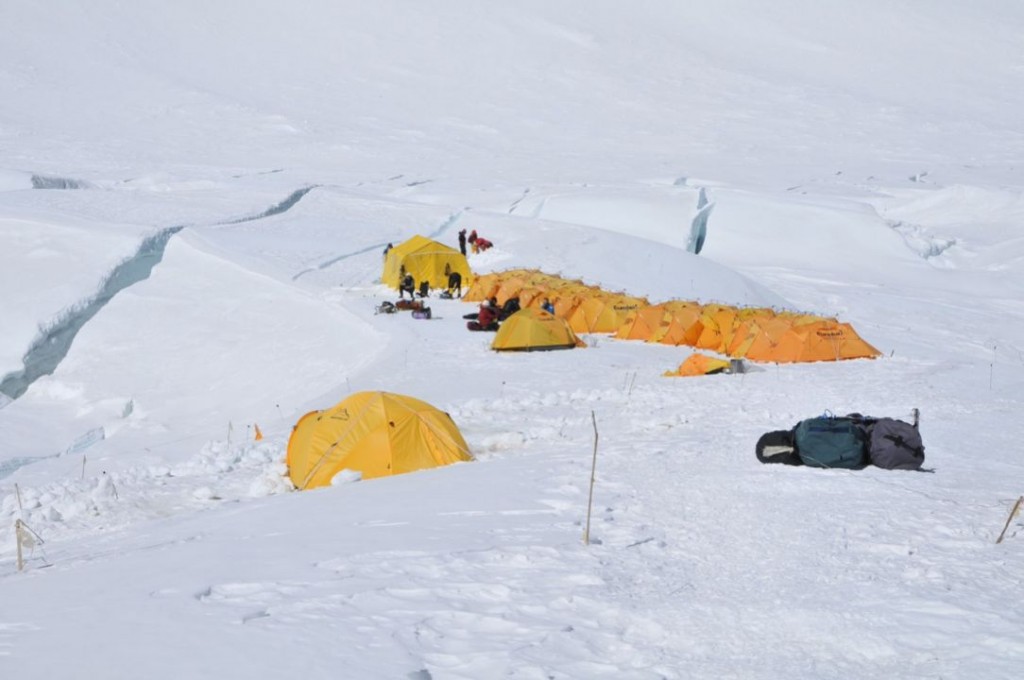 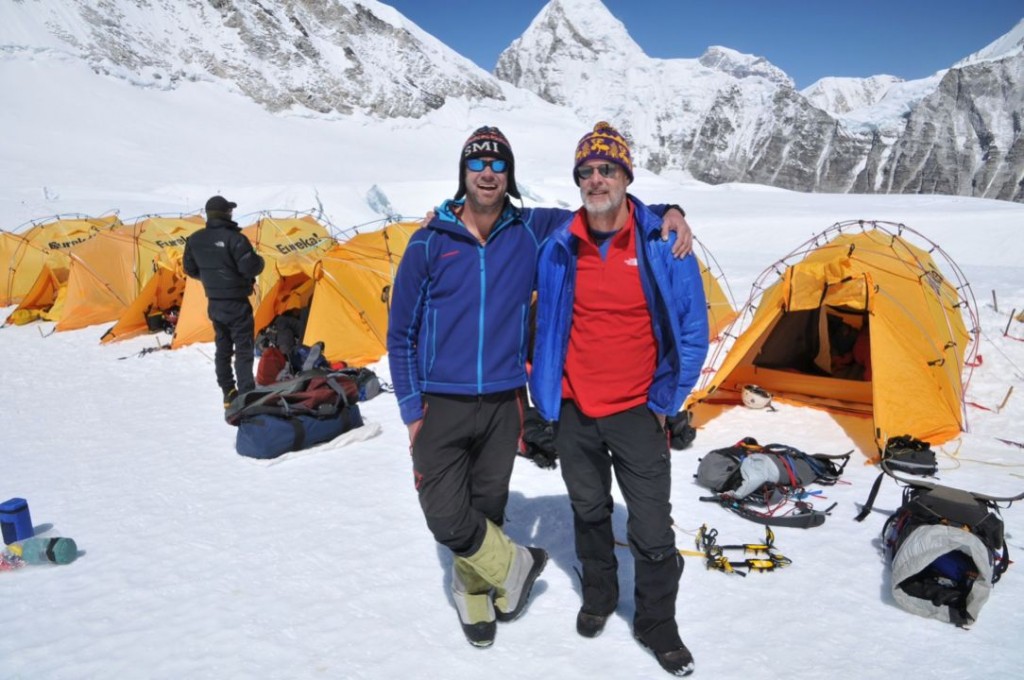 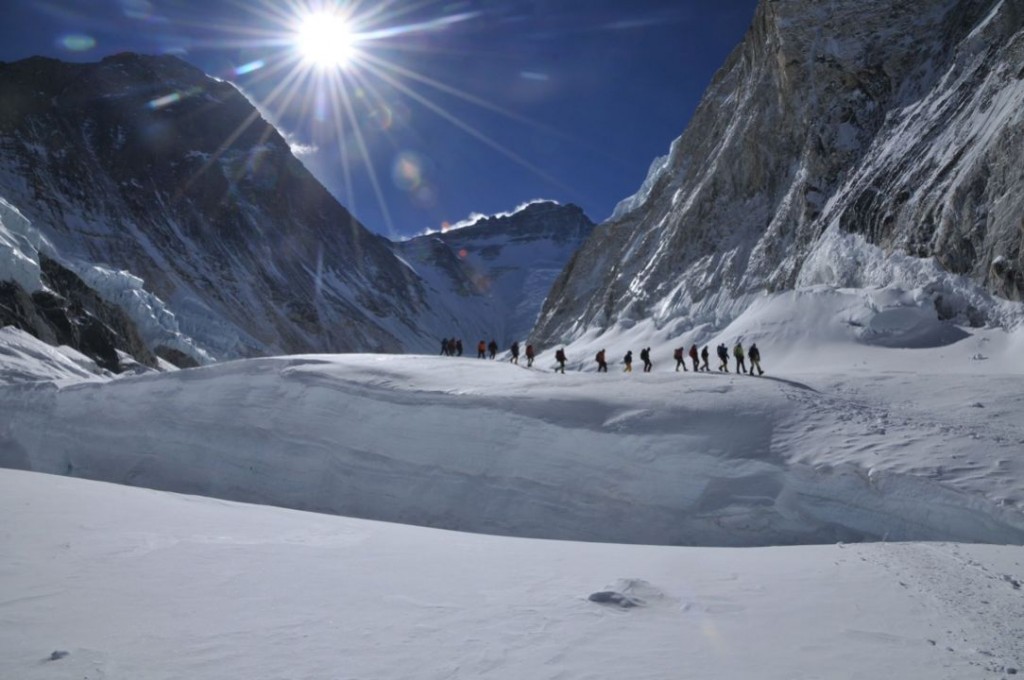 April 20: Looking up the Western Cwm during a day hike. Lhotse is the right peak on the skyline. The summit of Everest is just starting to reveal itself as the highest point on the left skyline. 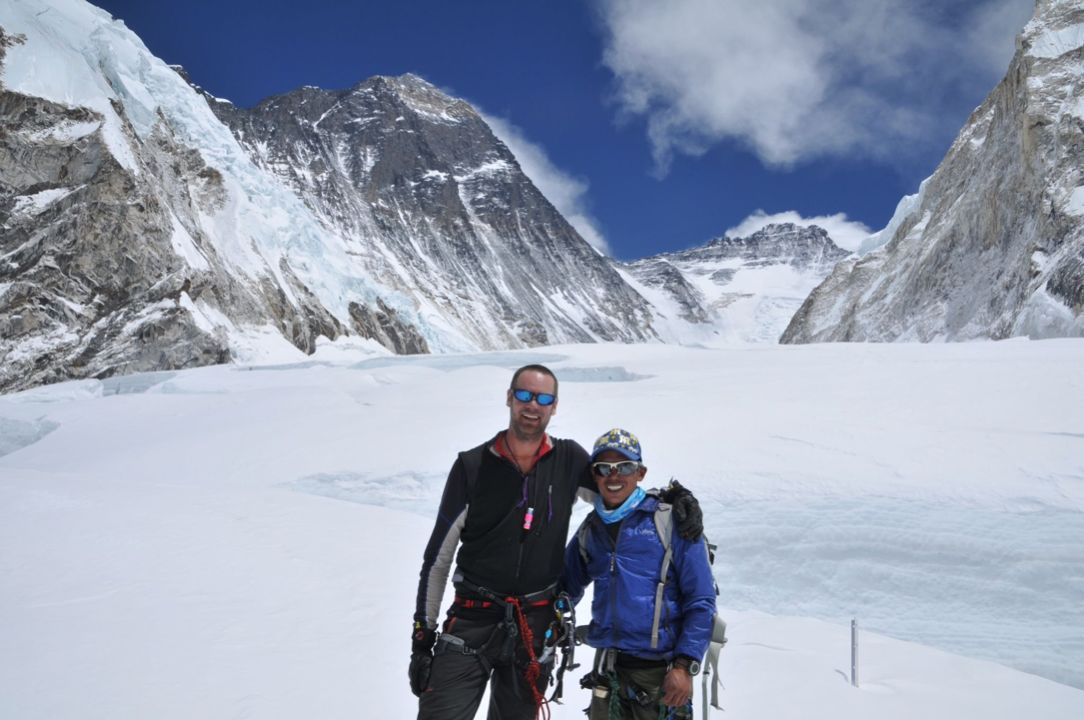 Kurt and Kancha Nuru Sherpa in the Western Cwm. Mt. Everest is on the skyline above Kurt's head. Kancha reached the summit of Everest for the first time with Kurt on May 21, 2008. He has now summitted four times. 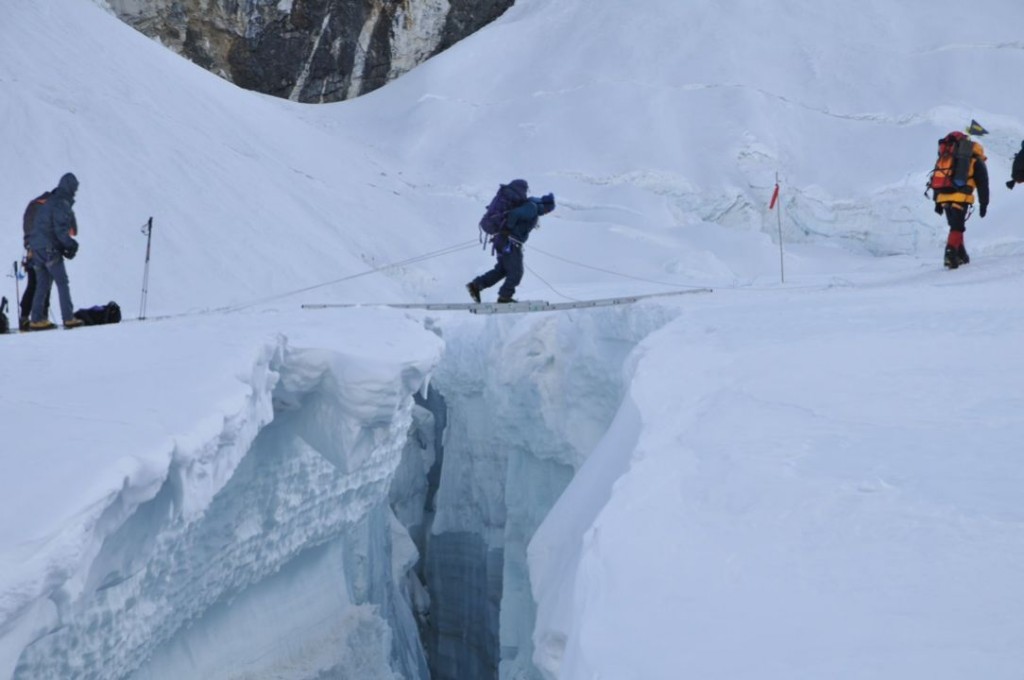 Ladder crossing in the Western Cwm. 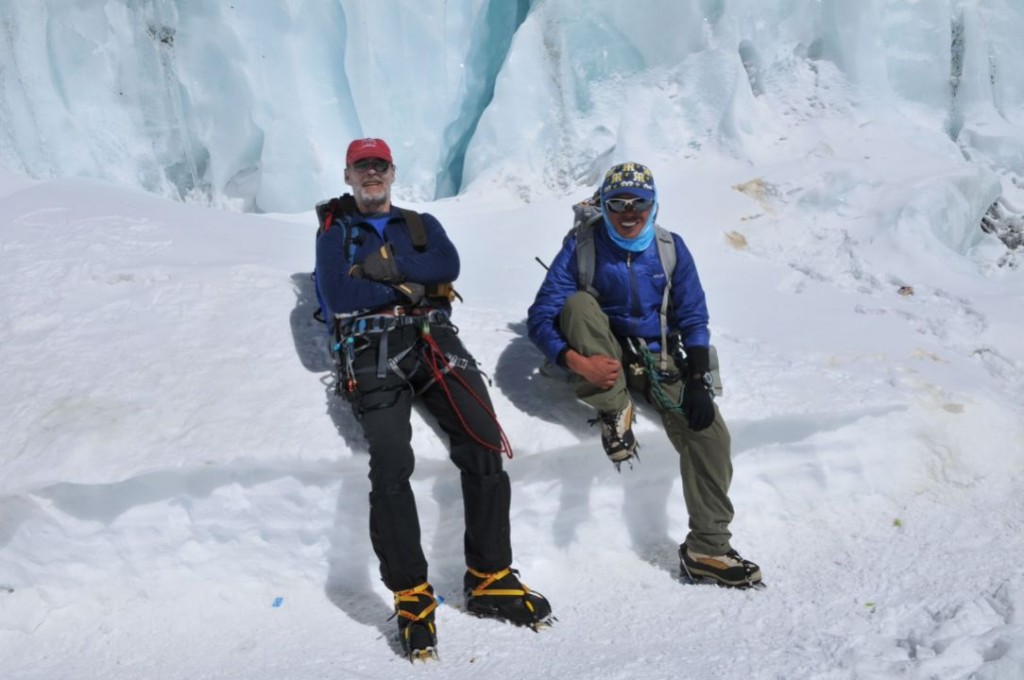 Fred and Kancha at a rest break en route to Camp 2. 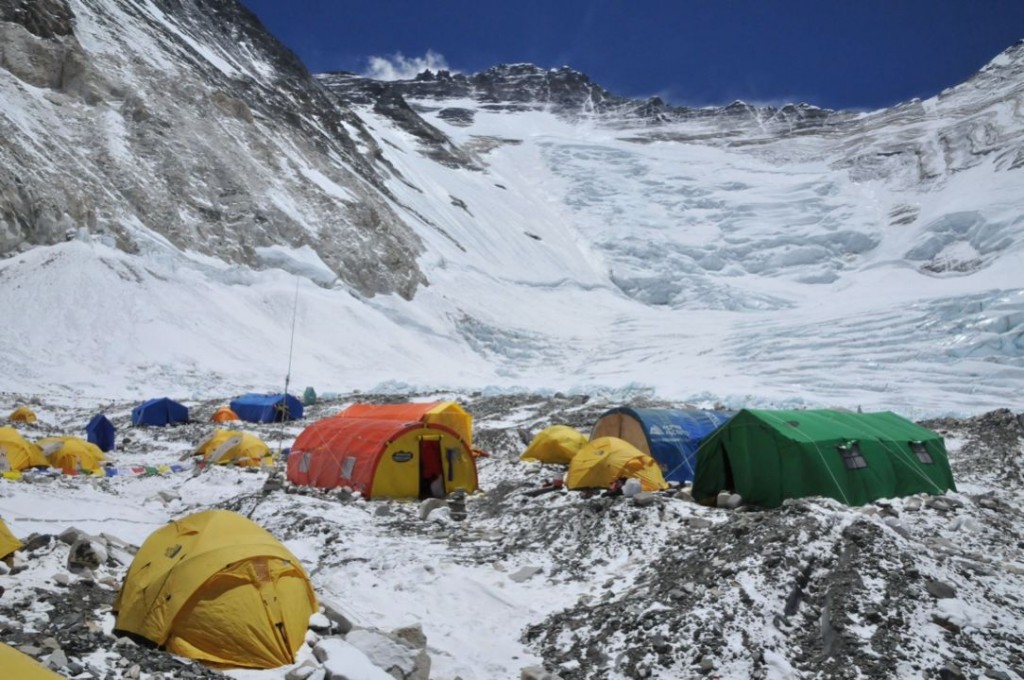 The Lhotse Face from Camp 2. 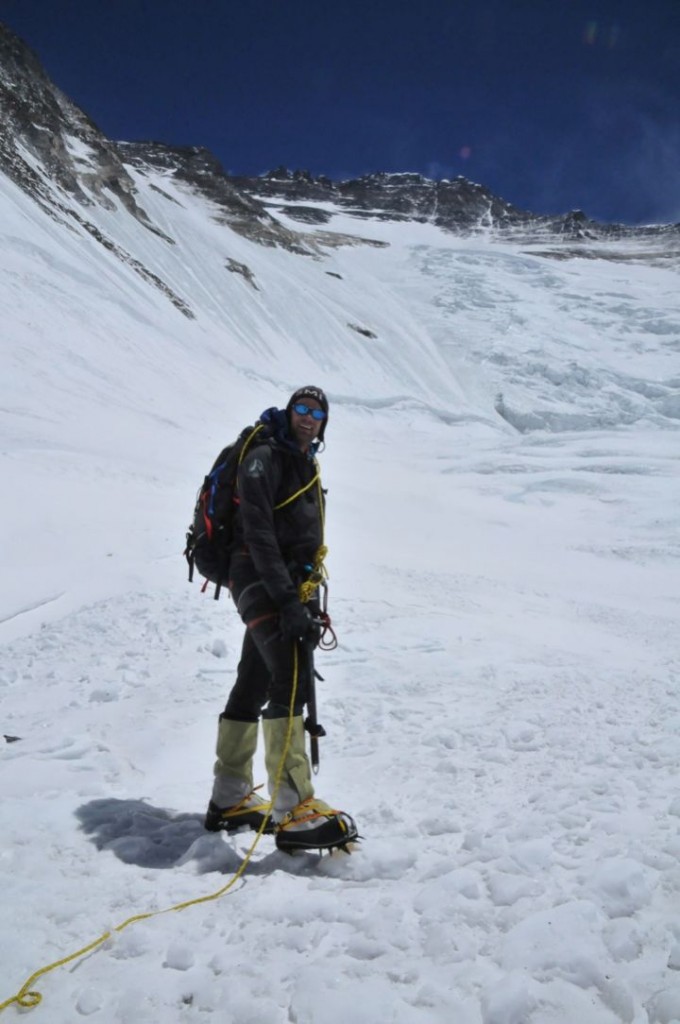 April 22: Kurt leading the way towards the base of the Lhotse Face. 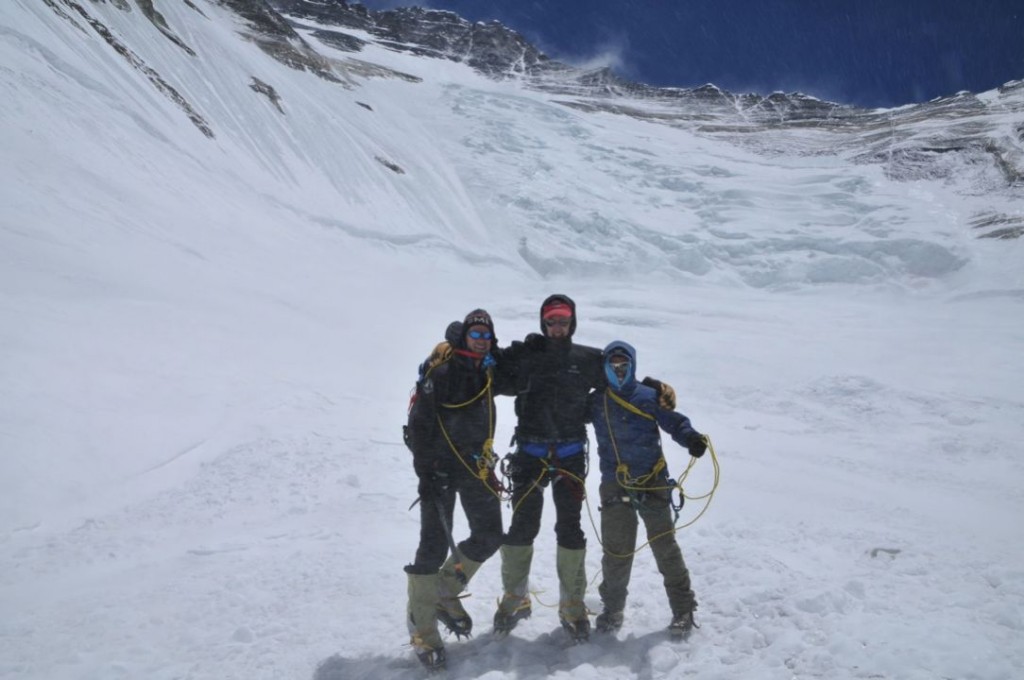 April 22: Kurt, Fred, and Kancha near the base of the Lhotse Face during an acclimatization hike.