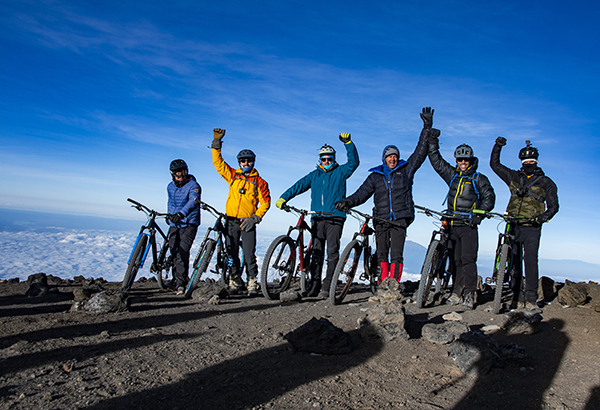 Summit Kilimanjaro MTB was a spectacular trip of a lifetime!  Five intrepid mountain bikers joined SMI founder Kurt Wedberg to climb and descend the highest mountain in Africa by bike.

The team flew to Moshi, Tanzania.  After 26 hours of travel time and a 10-hour difference from the Pacific Time zone the team took a day to adjust and stretch our legs.  Exploring the Tanzanian scenery on our bikes proved to be the perfect way to accomplish this! Riding through the town of Moshi and into the countryside past sugar cane plantations and rice fields the team soaked in the landscape and got acquainted with the people of Tanzania.

Kilimanjaro is the only place in the world where it is possible to pass through five climate zones in as many days; starting in a jungle and ending in an alpine environment.  Each zone is distinct and reveals new magnificent scenery of this exotic landscape.

The team began at the jungle trailhead at 4570’/1393m.  All of our equipment was sent by porters allowing us to go light.  Team member’s carried water, snacks, sunscreen, sunglasses, and a couple clothing items.  The route is a dirt road used as an emergency access path for park service vehicles.  The grade goes from mild to steep as it winds its way through the jungle slowly gaining elevation.  After about three hours the route breaks out of the jungle canopy at 10000’/3048m revealing views of this vast and beautiful landscape.  Six hours of riding brought us to our arrival at Horombo Camp 12200’/3719m.

Today was an acclimatization day.  Drawing from our over 30 years of guiding high altitude peaks worldwide including 3 summits of Mt Everest and 33 climbs of Kilimanjaro we have learned that the safest and most effective way to acclimatize to high altitude is to “climb high and sleep low”. This helps the body begin to produce red blood cells that will in turn aid in successfully acclimating to the newer elevation.

Starting from the Horombo Hut today’s ride was a loop that ascends one trail, then going cross country it connects to another trail.  It offers the opportunity to ascend to over 14000’.  Dressed in rain gear for the intermittent rain the team would experience all day the team ascended through the Moorland.  Passing Zebra Rocks (13225’/4031m) the team veered cross country tp connect to the Marangu Route, which would be the trail leading to high camp and summit day.  At this elevation the path resembles a dirt road in width and the gradual grade makes for excellent riding.  Reaching 14000’/4267’ the team took a good break in the midst of a wide open stunning landscape while replacing calories and rehydrating.  Then it was back to Horombo Camp to recharge for the next day’s move to high camp; Kibo Hut at 15485’/4720m.

Weather cleared for the move to Kibo Hut (15485’/4720m).  With a dark blue sky above and the Kilimanjaro massif in front of us our route was mostly on a wide gradual path.  Moving into the Sub-Alpine climate zone the vegetation thins out opening spectacular vistas across a moonscape decorated by volcanic rock.  After 5 hours of riding we arrived at Kibo Hut with plenty of time to relax, hydrate, and prepare for summit day.

Reaching the summit of Kilimanjaro requires an “alpine start” at midnight.  Much of the terrain indicates “hike-a bike” because it is much steeper than previous days.  After several hours of ascending the route approaches the crater rim at a landmark called Gilman’s Point (18652’/5685m).  The next part of the route was to traverse the oval shaped crater rim. We were able to ride our bikes once again because the terrain dramatically flattens out on the crater. At the next landmark, Stella Point (18885’/5756m), we got our first glimpse of the breathtaking sunrise. The growing pre-dawn light revealed spectacular views of the African plains, the crater, and the origins of the glaciers that still decorate the flanks of Kilimanjaro. We also got our first glimpse of the summit of Kilimanjaro, which is called Uhuru Peak.

Celebration ensued upon reaching the summit!  A magnificent sunrise and stunning views from the Roof of Africa were followed by many pictures.  It was then time to prepare for the amazing descent.  The descent was in 3-parts:  the ride around the crater rim, descending to the Kibo Hut, and the return to Horombo Camp.  Riding around the crater rim in the rarified air above the clouds was exhilarating.  Dropping off the rim the route is steep and rocky.  Carrying bikes through this section the trail below is sandy and steep.  Arriving at the Kibo Hut in the warmer air team members changed clothing layers, rehydrated, ate some snacks and inspected their bikes.  Then it was time to mount up for the thrilling descent down to Horombo.  A distance that takes several hours by foot was covered in about 90 minutes!

Kilimanjaro MTB – Day 5:  The Return to the Trailhead

After an epic ride from the Roof of Africa the team celebrated with a hearty meal and a Kilimanjaro beer!  Sleeping at 12200’ felt low after our time at high altitude.  Having slept soundly and well rested the team was psyched for one final downhill ride.  Passing in to the jungle zone and the trailhead the team decided to continue riding through villages as children waved.

An 8 minute video recap of the epic MTB descent of Kilimanjaro!

Are you ready to experience Kilimanjaro MTB?

Kilimanjaro MTB was an idea conceived by longtime friends of SMI Tristan Gonzalez and Anthony Morasco.  During several successful climbs on California’s 14ers they talked with SMI founder Kurt Wedberg about the idea of bringing mountain bikes to the top of Africa’s highest mountain.  Kurt began leading expeditions to Kilimanjaro in 1996 and has successfully summited it by 7 routes.  In the process he’s not only learned this mountain like nobody else but has cultivated many close friendships in Tanzania making securing permits for this amazing journey possible.

Kilimanjaro MTB requires preparation and training just like any mountain climb.  SMI’s home base in Bishop, CA has an abundance of excellent mountain biking terrain for all ability levels available throughout the year.  Here are a few favorites: